Welcome to One and Done Sunday. One picture and five links that are worth your time.

Saturday night I finished up at my old show, at least until the summer. I’m officially down to one gig now and even though we’re about to go into the long days there, it’s good to not have a split focus anymore.

At home our Harry Potter Sunday series continues. Last week was pre-empted by the Super Bowl. #5 was bummed out about that, but I informed him that as his stepmother it was my moral obligation to force him to watch football. He changed alliances with every score until finally #2 said to him, “If this were an actual war, I’m pretty sure everybody would start shooting you right now!”

This week we’re on number four, Harry Potter and the Goblet of Fire. Before we got started, Casey ate the whipped cream off #5’s milkshake.

I would have done the same thing.

There’s a scene in the movie where Harry is fighting a dragon and it breaks free and chases him to the roof of Hogwarts. There they land, Harry hanging on for dear life, trying to reach his broom while bits of roof break away underneath him, the dragon clawing towards him, bashing its tail and sending debris flying.  At the climactic moment, #5 says, “They’re gonna have to reshingle that.”

This week’s picture demands an explanation.

When I first went on the road, I owned three pairs of shoes. None of them were cute. On my second tour I was CC’s assistant, and he was traveling eight pairs of shoes.

I gave him a lot of grief for that.

He, in turn, gave me an empty road box for my stuff. Suddenly, I had almost nine cubic feet of storage space to fill with things that I didn’t have to haul through the airport.

I found out I liked shoes.

I also found out that CC and I have very different styles.

Recently I flipped out over the above Ariat boots on Zappos. Let’s just say CC was less than enthusiastic about them.

No, let’s repeat what he actually said to me: You are way too old for those boots.

I’m positive that what he meant was Those rock. You should totally buy them!

I did in fact buy them, because I was sure he wanted me to, and I always get at least three compliments every time I wear them. Usually in front of CC.

Also awesome is that he got me long-stemmed roses on Saturday for finishing up my gig and I was the only girl with flowers on the subway.

Now for your links. I gotta be honest, I didn’t read anything this week. So while Harry Potter was on I went to some places I can count on.

First, four artists. I hope to be bringing you more about one of them soon, but for now, check out their sites:

This chick does cool shizz with dead animals. No lie. Kimberly Witham.

I love all of this lady’s work, but her countryside photos really speak to my soul, being mostly shot in Indiana, where I grew up: Jolie Buchanan.

I work with this guy when he’s not off doing fabulous artistic projects: Davis Duffield.

Finally, because sometimes you just need to laugh your ass off about a homicidal monkey: The Bloggess- Would You Like to Buy a Monkey?

#3: Hey, have you ever seen a movie about a giant asteroid that’s going to hit the earth so like five people go on it to dismantle it?

Me: They go to dismantle a rock?

Me: While they’re standing on it?

#3: So that it doesn’t destroy the earth.

#3: Whatever. I can’t think of the name of the movie. It starts with an a.

Hello and welcome to another edition of Full-Assed Friday, where I write about something that’s awesome, funny, or just plain different- hopefully something that is a little bit outside the normal realm of what you experience every day.

Both of my readers whom I do not work with and am also not related to have suggested that I could do a Full-Assed Friday post about my job. Being that I haven’t put one of these up in like two months I thought, hey, what the hell. Plus we did something kind of cool a few weeks ago.

I do sound for musical theater. The producers of Broadway shows tend to keep a pretty tight rein on publicity and image, with good reason. I don’t go into show-specific details on my blog because I don’t want to violate that. Or get in trouble. These people are paying me, for god’s sake.

I decided that for this post we needed aliases. In the form of photo manipulation. Of course I immediately turned to the blogger with the hottest photoshopping chops I’ve ever seen, Julie of Go Guilty Pleasures.

Okay, so here’s the deal. My musical did an appearance on one of those national early morning news/talk television shows. The kind of TV show that most people have on in the background every morning as they’re getting ready for work or getting the kids off to school.

The kind of show I never, ever watch, because they’re on early; plus, I live under a rock and also my family doesn’t ever let me have the remote.

Consider for a moment how early the people on the shows need to be there for a show that begins broadcasting at 7am. To prep, to get dressed and get into hair and makeup, to review, to rehearse.

It’s early. Damn early, we, the guests, think. But the TV show’s hosts get there earlier than the guests. And guess who gets there before the hosts?

The TV crew usually starts around 2am. I see 2am frequently, but usually I see 2am and think, “Crap, I got sucked into watching heavy metal documentaries and I have to make lunches in five hours. Again. And where the hell was I when Anthrax did that tour with Public Enemy? Dammit!”

I did not have to be in at 2am because in this case, I wasn’t the real crew. I also didn’t have to find my own way in, for the same reason. A car came for me at 4:30am.

Forty-five minutes later (half the time of my normal commute) I was at the studio.

Then the boys got there.

What? Aliases through photo manipulation. I think they look perfectly natural.

The best part about my early call is that I don’t have to sing at that hour. These guys do. They’re singing live (yes, actually singing, no pitch correction, and they can’t suck, because “fix it in the mix” is a lie). They all did a show  mere hours before, and we have two shows scheduled this day, after the TV appearance. I can’t adequately express how frickin’ good these guys have to be to pull this off the way they do.

Ahead of time, I make contact. Days before we get there, I let them know what our requirements are: what mics we need, the details of our monitor mixes.

At the studio I make contact with the TV crew face to face. I’ve been here before, maybe five years ago. There’s only one new guy on the whole crew. I try to not be a jerk, but also not a weenie. We set for rehearsal and I tell our guys to let me know how they feel after we run it. I stand back.

The single most important thing is that our guys- the talent, the entire reason that we’re here- are comfortable. If they’re comfortable enough (I say “enough” because it’s not like they’re going to be, you know relaxed, exactly, in a situation like this), odds are they’ll sound good. 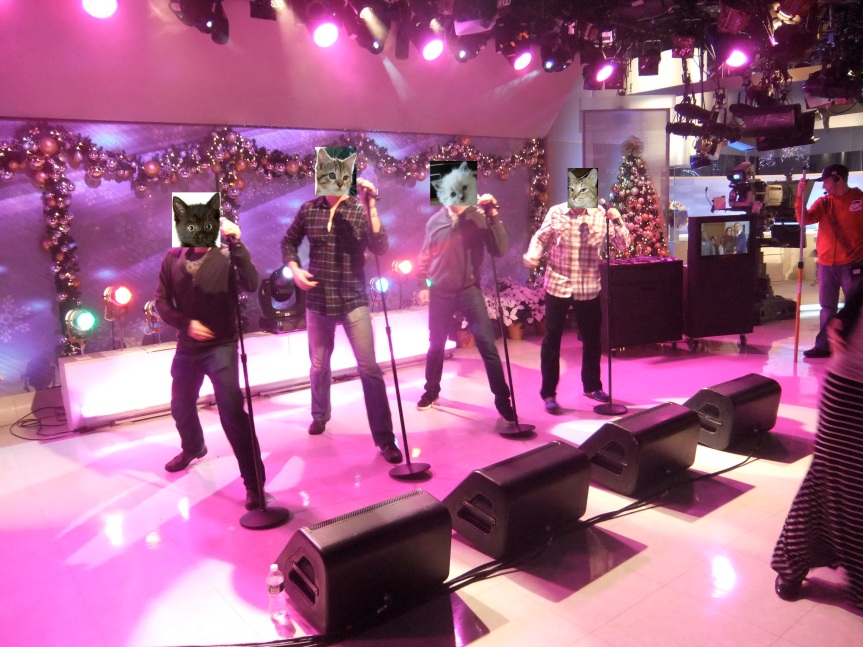 What? I know, you can’t really tell where the photo edits are, can you? She’s that good.

At this point everybody else jumps in. 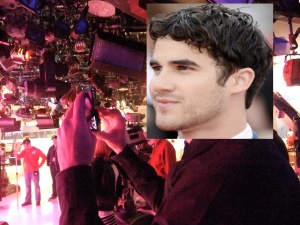 The TV show’s stage manager, the segment producer. Our choreographer. Our wardrobe; the TV show’s hair and makeup.

We run through the numbers. I ask how their monitor mixes are; they ask for changes and I pass them along. The choreographer works them; the stage managers talk about how the shots look and make adjustments to where they stand, where they look. I tell the guy who keeps dancing away from his microphone to get a little closer to it. 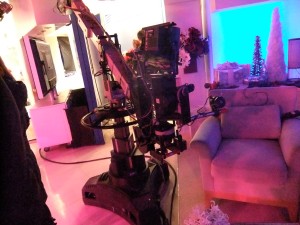 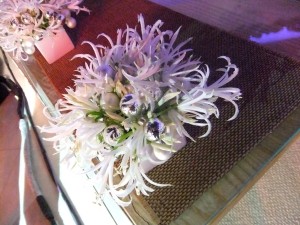 We are but one small part of a two (three?) hour show. We’re like, I don’t know, six or seven minutes? And that’s a lot, in TV time. But there are a lot of other parts of the show, so there’s a lot of waiting.

There are donuts and fruit in the green room; coffee, tea, and water. And TV’s (tuned to the show, of course). There is no wi-fi.

They let me in the booth. There’s a moment when I’m afraid they won’t, but my persistence pays off and I’m in.

Every time I enter a television broadcast booth I’m blown away by the complete and utter chaos that ensues, and I’m shocked- seriously, totally shocked- by the fact that most live broadcasts come off without massive audio errors (pre-2011 Tony broadcasts excluded).

A biscuit is what we call an intercom speaker. In a TV booth there are at least five or six going- speakers that each carry one voice: director, stage manager, studio guy, monitor guy, and someone in each location they’ll be broadcasting from, whether that is downstairs or in another city entirely.

All these biscuits squawking.

Everybody talking at the same time.

Plus there’s a second guy in the booth, patching these sound and intercom feeds and previewing them. Both guys answer the biscuits, sometimes even ask questions. 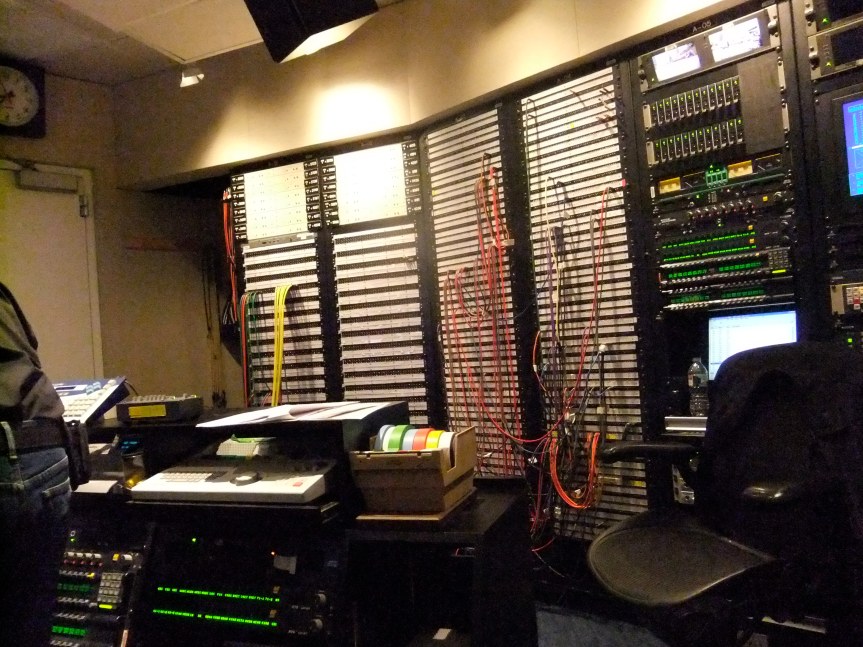 Oh, and meanwhile, they are broadcasting the show RIGHT NOW. To millions of televisions across the country. And they’re rehearsing stuff and previewing videos. During the commercials. Many of which also have audio going through this same console. Somehow the sound guy keeps track of what his broadcast feed sounds like. It’s completely insane. I’ve never been in a broadcast booth where the sound guy isn’t sweating.

So I sit there in awe of the flurry of activity going on around me, we do our first number and the guy in the booth is good. Somehow over all the biscuits squawking he listens to me and makes the adjustments I ask for. I would melt down if I tried to do his job. We do another number and the host comes over and does a live interview with the guys and I just think, wow. Actors sometimes get a bad rap about how easy their jobs are, but not a single goddamn thing about this is easy.

We wrap, and I walk back to the theater because there are two and a half hours before my call time for the matinee, which isn’t enough to go home and back. I will not watch the recordings of the broadcast.

Some of our producers have delivered Christmas popcorn cones with chocolate peppermint drizzle. I’m hungry enough that I eat one and it’s the best damn thing I’ve ever had. Only the fact that I’m too tired to move keeps me from prowling around trying to find extras to swipe. Then I fall asleep in my chair for two hours.

(Yes, that was just about as comfortable as it sounds. And you wonder why I have to do yoga.)