I suspect most parents have moments where they stop spinning in circles for a breath and wonder what the hell happened. I’ve been channeling my inner David Byrne (“My God/how did I get here?“) most of this year. While much of the country is getting back to “normal”, the weird and/or hard shit keeps happening here. Here, the land of decidedly not-normal, where we still don’t have indoor seating at restaurants, where I lost two friends in the same week–one to lung cancer and one to suicide, and where God only knows if we will ever be able to go back to work on Broadway.

Friday our minivan died. Two weeks before we need three cars for three very differently scheduled students commuting to schools nowhere near each other. Because of course it did. Thanks, COVID. Also? 2020 is an asshole. If 2020 were poised on the edge of a cliff and started to lose its balance, I’d push it right over. It’s a total dick.

The Zombie Van was a 2007 Honda Odyssey with 230,000 miles on it. It really didn’t owe us anything else. It had already over-delivered. CC took really good care of it, but after the door fell off we accepted it was time for palliative care. We’d make her as comfortable as possible and she’d let us know when it was her time.

She died in the parking lot of the storage unit where we were hauling the last of #2’s stuff, to be taken to her when she moves into her apartment in the Midwest. The shop called with the news:

“Vehicle not starting. Battery failed load test. Alternator not charging. Valve cover gasket leaking oil onto alternator. Transmission dry, fluid leaking out of transmission cooler lines and radiator. Cannot check for codes for engine or transmission due to battery being dead and won’t know if transmission is operating normally. Power steering pump is leaking as well.”

So $3600 to get to the point where we could find out if it also needed a new transmission. My God I haven’t laughed this hard in a long time. I guess she had one more gift left to give.

The punchline (no, that wasn’t it) was that we couldn’t get #2’s bed frame out because the back door wouldn’t open. BECAUSE IT’S ONE HUNDRED PERCENT ELECTRONIC. BECAUSE THAT’S BETTER. CC and #5 went back the next day with patience and ingenuity and successfully removed it. Sadly, the 6-CD changer (remember those?) held on to Operation Mindcrime, Clockwork Angels, and Hardwired to Self-Destruct and will take them to the grave.

A super bright spot is that I have an article in the September issue of Stepmom Magazine. If you’re a stepmom, this magazine is a lifesaver. There are regular contributions from therapists, stepfamily coaches, and smart, helpful stepmoms. I only got in because I told them if they didn’t take my piece, I’d send my house-bound kids their way, one at a time.

My piece is about returning to a full house in quarantine when you were damn near an empty-nester. While you do have to subscribe to read it, you can subscribe a month at time and test it out. There’s even a free 30-day trial.

Meanwhile. . . have any of you ever beat my mileage on a drive-it-til-it-dies car?

I remember the day it happened.

Our school district has an evil contrivance called “Winter Break”. Don’t confuse this with the break that happens in December, the one punctuated by good cheer and the type of good behavior that can only be brought about by the imminent threat of No Presents.

The “Winter Break” of which I speak happens in February, near Presidents’ Day. Around the time when you haven’t seen the sun for about three and a half months and would cheerfully set your winter coat on fire you’re so sick of it, were you not so entirely dependent upon it to keep from freezing to damn death.

Most years Winter Break is an entire week long, depending on hurricanes and teacher negotiations.

This is a vile break for several reasons, but the most important are these:

2) CC is always in production on one of said shows during this break and working double time.

3) I am not, and am therefore locked inside during the day with the kids.

Yes, “locked inside” because, remember:

The first year we had the kids, we were approximately 38 hours into Winter Break. I was five hours past sanity. But we had finally landed on an activity that made everyone happy: they made cookies while I unpacked CC’s family china and washed and dried it.

I looked at the clock and  it was 2pm. We had all been so absorbed in our tasks that I had entirely forgotten to feed them lunch. There were still three boxes of china left to unpack, and all the counter space was taken up with it. I was holding in my hand a shallow bowl that had a weathered old note indicating the origin and the date “early 1710’s”.

Me: Do you want me to make you some canned beef stew, or would you rather eat cookie dough for lunch?

So it began that I don’t feed my kids lunch when they’re home. Lunches to take to school are no problem–especially now that CC makes them pack their own lunches.

At first I continued offering no-brainer choices like the first one to get out of making lunch. Then I moved on to having to run an urgent errand at lunch time and leaving a responsible kid in charge of lunch. Eventually, I stopped even trying.

They don’t seem to be bothered by it.

We have enough things around that they can fix themselves, or graze upon, and every so often one of them will come to me and say, “I’m hungry!”… and if it’s one that I like that day, I’ll make them something.

Once I noticed the frozen yogurt containers that #2 and #3 were eating out of very near meal time. The ability to obtain junk food on a whim is, I believe, the most valued benefit of having both a drivers license and a job for a teenager.

Me: I take it you guys aren’t super hungry right now?

#2: Because you weren’t going to cook for us anyway, were you?

Oh wait, that was true. And it happened today. At dinner time. Nevermind, that story has nothing to do with this blog post.

What’s the lamest thing you’ve ever made for lunch?

Kids are funny about holiday traditions. They’ll cling mightily to some while not remembering others; actively resist certain new ideas but welcome others without question.

Easter is where all holiday traditions have broken down in this family. We’ve done something different every year, to new levels of failure every time. I posted about a couple of them here and here.

Last year after so many Easter ideas that didn’t fly, I gave up trying to find something that would work. I dumped some chocolate in a pile on the table and slept in while CC took the kids to church. The older kids hid eggs for the younger kids, and I felt guilty for a whole year. I believe they considered that the best Easter ever. . .

But you never know what kids will latch onto. They’re always watching you, even when you think they aren’t paying attention. Turns out I did start a tradition: The five-dollar egg, and the dog poop egg.

#5 started asking about this year’s egg hunt shortly after Christmas.

The other kids would chime in that they just weren’t into egg hunts, didn’t want to color eggs, had no interest in doing anything like that- they were way too old for that stuff. They stopped short, however, of giving up their Easter baskets.

Spurred by last year’s guilt I decided that I would do an egg hunt this year, by God, because #5 kept asking about it. True to their word, his sisters all bailed on coloring eggs. All except for #4, who was forced into it by the babysitter after #5 had waited for her all day to do the eggs.

Sometimes it sucks being the youngest. I remember that.

The astute among you will notice that I am not the colorer of eggs. If you dig through the archives, you will also discover I don’t carve pumpkins, either.

But something. . . dare we say miraculous? . .  happened on Easter Sunday. Three of the girls decided to join in the egg hunt. Probably it was the promise of the $5 egg. Now, I may have hidden that egg in a place where it was more likely to be discovered by a ten-year-old boy than a teenage girl. Maybe. I may or may not have given him a word of encouragement/direction before the egg hunt began. I did not, however, tell him where it was.

Regardless, #5 did find the $5 egg (which was an egg with five bucks rubber-banded to it because I didn’t get plastic eggs this year).

#3 found the dog poop egg- which was a poop-colored egg hidden near a pile of dog poop (not in it). The best part is that she didn’t notice the poop when she found the egg, and was more than a little grossed out when I pointed it out to her. Win-win.

Peep Dioramas were next on the agenda, the prize up for grabs being a bag of Robin’s Eggs and some Silly Putty. The only rules were that Peeps had to be involved, and so did their Easter baskets. I guess I was envisioning  small Peep scenes contained within the Easter baskets. But the term “diorama” became. . .expanded. And suddenly three teenage girls and one ten-year-old boy were madly scrambling for anything remotely resembling blocks, dolls, or action figures.

All with showtunes blasting on Pandora.

My living room was epic.

And twisted. Most of the Peeps died. Including one that was puggle-napped.

#5’s scene involved a roller coaster, military vehicles, and towers. I called it Peep Inferno, even though nothing was technically on fire. Yet.

It included a botched helicopter rescue: 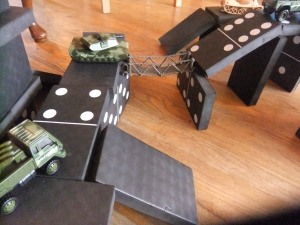 I seriously debated whether or not to include #4’s for fear of my door being broken down by DYFS. Then I figured, what the hell. If it’s the Peep diorama that sends DYFS over the edge, they haven’t been paying attention.

I dubbed this Rock Show of Doom because she claimed it all started at a concert:

And yes, I am intentionally avoiding close-ups of all of the creepily posed dolls. Please don’t scrutinize it.

While it was never clear who started off performing in the concert, it was very clear who the victor was:

#3’s started off as a volcano sacrifice (with tomato and Craisin lava). . . 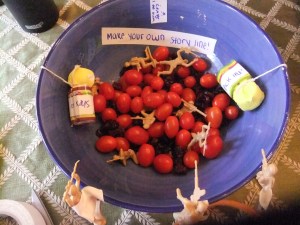 But the availability of extra Army dudes changed it up a little and she opted for a “make your own story line” motif.

With her Peep depiction of Les Misérables: 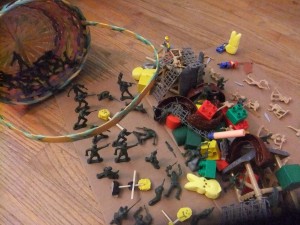 I have thrown Peeps, stuck Peeps to the wall to have Peep races (last Peep standing wins), tried to blow up Peeps in the microwave, eaten Peeps (not recommended), and cleaned up dog-vomited semi-digested Peeps (also not recommended). Hands down, the Peeps “dioramas” were the best Peep experience I’ve ever had. Maybe this tradition will stick (like a Peep, to the bottom of your shoe…)

What’s the most fun you’ve had with Peeps?