Recently, a friend of mine lost her cat. He was a great cat named Punkin and they loved each other well for nearly twenty years. She was understandably very sad.

The night he died, she was in the vet’s office and somebody brought in a rescue cat. Who needed a home. Who looked uncannily like Punkin, except longer. And possibly a little more like bacon. 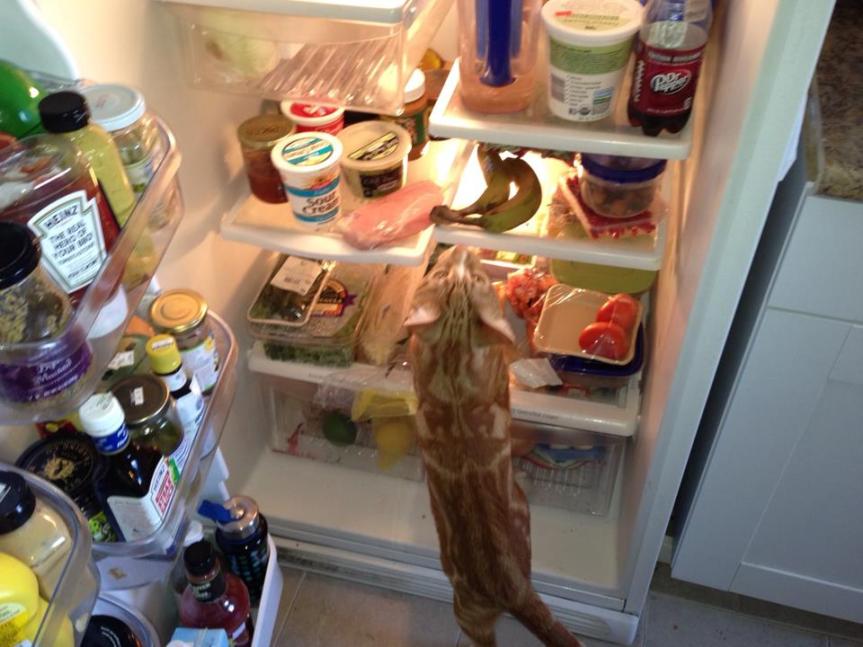 Doesn’t he look like bacon? Like raw bacon? It’s a matter of debate at work and I would like your opinion. His name is Rosenthal, but he is Bacon Cat to me.

As far as what he’s doing in the refrigerator, I’m quite sure he’s looking for water. In addition to being Bacon Cat, he is also Water Cat.

Speaking of rescue pets, I’m making a plug for 11th Hour Rescue with this post by Julie Davidosky here on my own blog: Best In Shelter.

Nina Katchadourian spends her time on long flights by locking herself in the bathroom and pretending to be 15th century Dutch paintings. Airplane Lavatory Self-Portraits.

Chase McFadden has resurfaced this week and I was reading some of his older posts on his blog and cracking up. In Case You Ever Wondered What Happened to Those Children from Deliverance

There’s a distinct taxidermy void on my blog. Let’s fix that. Truth In Advertising (Warning: If taxidermy creeps you out, you probably shouldn’t be here at all.) on The Bloggess.

Cartoon polar bears and hacksaw amputations- what’s not to love? The Real Bears.

Be sure to leave your opinion on whether or not Rosenthal looks like bacon. I don’t exactly have money riding on this, but something far more valuable: an unspoken air of self-righteousness that I will get to parade in front of those who disagree. Who may or may not be my superiors.

I started writing this post this morning but didn’t get it finished. The dogs were out of food, #5 had batting practice, I went to yoga, #4 had batting practice, I made dinner, I called my mother, I forced the kids to do chores. We had a very pleasant visit with kid #1A who is returning to college tomorrow. All of this is to tell you that everything is pretty much the same here in spite of my absence. 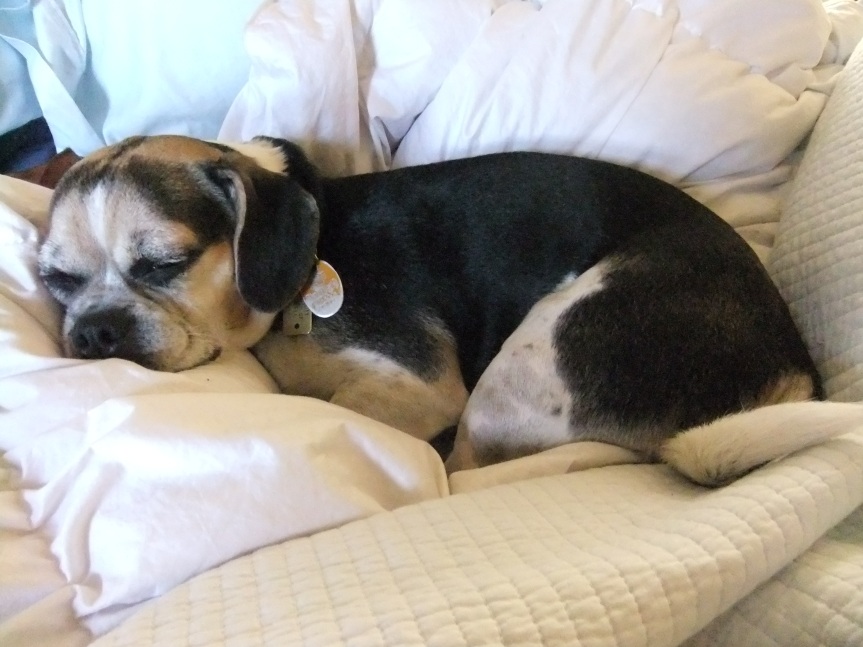 #5 informed me the other day that he’s going to be graduating in 2020. It doesn’t seem possible to me that he will ever be that old, let alone that it’s in seven years. He said he hopes he gets 20 pounds of bacon for his graduation gift. Since I have a source, I think we’re getting off easy. That’s way cheaper than a laptop.

The last time I made bacon for him, he held a piece up in the air and said, “I guess Charlotte couldn’t save Wilbur this time!”

There’s a new post for Tuesday. I’ve blogged ahead, taking advice from Thoughtsy. I hope you come back.

The Amazon banana slicer review was making its way around Facebook recently. CC hipped me to the fact that this is a trend, people posting ridiculously funny reviews for everyday items. Here’s a link to some of the funniest Amazon reviews.

Hey. How come nobody gets crabs anymore? Endangered Species a Victim of Brazilian Deforestation- Steve Maley.

The best part about this video is that Roundabout Theater Company actually threw down some cash for it. This is a well-produced piece of work. That, plus you get to see Chita Rivera chugging a bottle of champagne. The cast of Edwin Drood in actor Andy Karl’s rap about why bustles are hawt. Bustle Fluffah.

Infections Diseases of 20th Century Musicians. (thanks, Death Row for the link).

I love semi-colons; they thrill me almost as much as hot sauce does. Interview With a Semi-colon.

I have a special treat today. #5 has agreed to do a guest post.

Me: I have a favor to ask you.

Me: Will you do a guest post on my blog?

Me: Nothing. You did it already {I held up the story he had written}. You just have to say yes.

It’s a good story. Thrills, suspense, danger, bacon. Lots of monsters. We’re both quite proud of it.

On this day of giving thanks and counting blessings I always try to take a moment to remember maniacal and implicitly undead yet tasty breakfast meats . Enjoy!

One dark, dreary Halloween night, me Ethan, Hank, Brandon, Paton, and Chucky walked into a creepy haunted house in a cemetary with our candy. Giant black spiders were crawling everywhere. That completely explained why there was absolutely no girls there. A giant, greasy, delicious looking piece of bacon walked up and invited us in. We walked in terrified as a sharp, deadly blade shot out of the wall. I saved us all except for the bacon, because then I knew it was a trap. Grease was splurting out of the bacon.

As a prize for saving us from them, they let me eat it. I devoured the bacon. Everyone was amazed by how fast I ate it. It was terrific bacon, and the best bacon I have ever tasted. I started to wonder who made all of the bacon. We tried to run for our lives, but the huge, scary door slammed closed with a quick squeak before we had a chance to get out. We all screamed louder than we have ever screamed before. 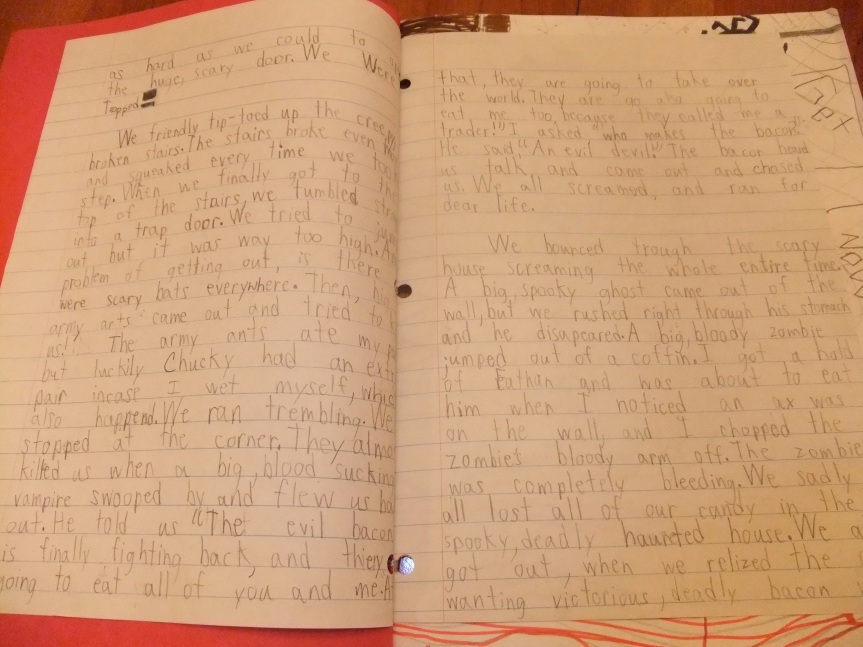 We tried as hard as we could to open the huge, scary door. We were trapped!

We friendly tip-toed up the creepy, broken stairs. The stairs broke even more and squeaked every time we took a step. When we finally got to the top of the stairs, we tumbled straight into a trap door. We tried to jump out but it was way too high. Another problem of getting out, is there were scary bats everywhere. Then, big army ants came out and tried to kill us! The army ants ate my pants, but luckily Chucky had an extra pair incase I wet myself, which also happened. We ran trembling. We stopped at the corner. They almost killed us when a big, blood sucking vampire swooped by and flew us back out. He told us “The evil bacon is finally fighting back, and they going to eat all of you and me. After that, they are going to take over the world. They are go also going to eat me too because they called me a trader!” I asked, “who makes the bacon?” He said, “An evil devil!” The bacon heard us talk and came out and chased us. We all screamed, and ran for dear life.

We bounced trough the scary house screaming the whole entire time. A big, spooky ghost came out of the wall, but we rushed right through his stomach and he disapeared. A big, bloody zombie jumped out of a coffin. I got a hold of Eathan and was about to eat him when I noticed an ax was on the wall, and I chopped the zombie’s bloody arm off. The zombie was completely bleeding. We sadly all lost all of our candy in the spooky, deadly haunted house. 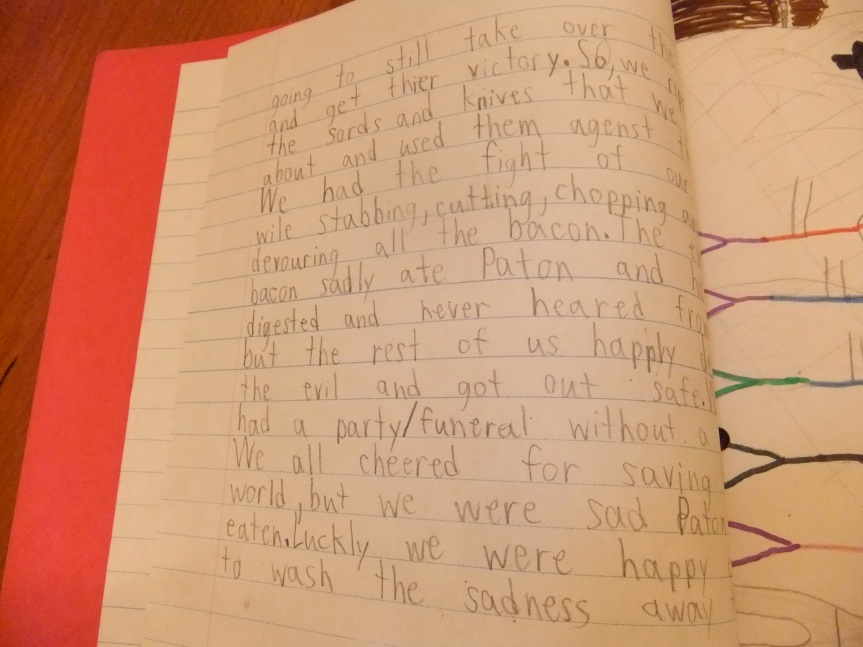 We almost got out, when we relized the evil, wanting victorious, deadly bacon was going to still take over the world and get their victory. So, we ripped out the sords and knives that we forgot about and used them agenst the bacon. We had the fight of our lives while stabbing, cutting, chopping and devouring all the bacon. The evil bacon sadly ate Paton and he was digested and never heared from again but the rest of us happily destroyed the evil and got out safe. We all had a party/funeral without a body. We all cheered for saving the world, but we were sad Paton got eaten. Luckly we were happy enough to wash the sadness away though. 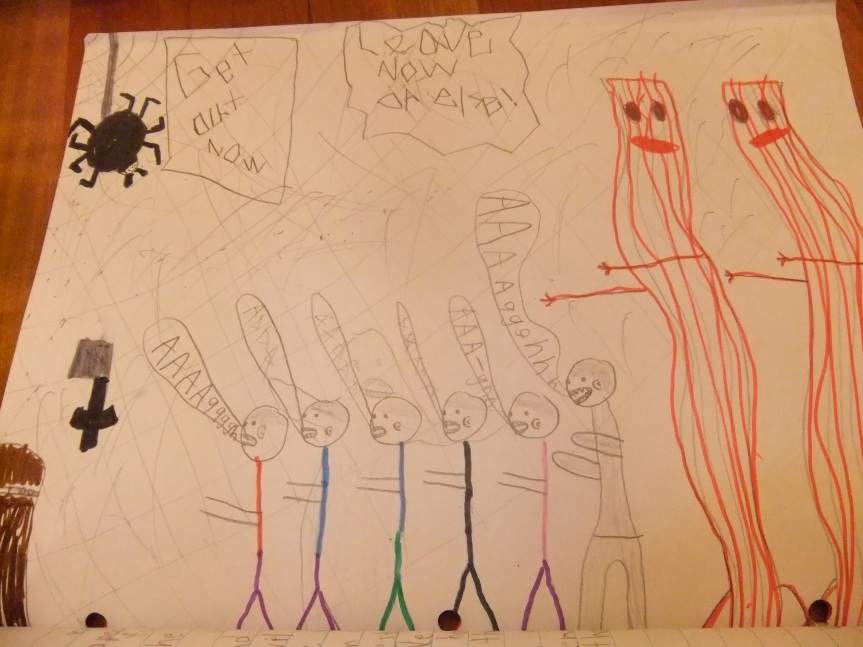