This week I came across a post on Not-So-Wicked Step Mom where the author confessed to not knowing of a Narwhal’s authenticity. I’m not talking like, a specific Narwhal, maybe one without proper identification or one that was behaving like a gazelle or otherwise being a poseur. I mean she didn’t know that Narwhals were not imaginary until she walked in on her family watching a documentary about them.

Is it because I grew up in Indiana, sans Diego and sans Wonder Pets? I definitely never saw one in a zoo. I certainly learned more world geography than Narwhal facts (and that’s saying something).

In fact, the only time I had ever heard of a Narwhal before reading this post was in the Archie McPhee catalogue, purveyors of all things hilarious and ironic. They used to have a Narwhal/Unicorn death battle action figure playset. I believe I drew my own conclusion.

#4: Yeah. Narwhal, narwhal, swimmin’ in the ocean, causin’ a commotion, cause you’re so awesome.

Then later this week, we went to the elementary school for parent-teacher conferences. Outside one of the classrooms was a display of kid projects on ocean animals. Guess what was represented? It wasn’t no damn unicorn.

Here’s your picture. I took it with my phone last night to demonstrate how awesome I am to go with this post. Saturday night on Broadway, waiting near the subway for my husband to finish his show. I’m set up with a seltzer and a stack of critiques for my writing group.

Do I know how to live, or what?

Also, I could use a manicure.

A really damn good list of dating hints for teenage boys: Given Breath: Pick You Up At Seven.

The pros and cons of dating a yogi (what you should know before you get into it): The View From My Mat

Musings from the mind of a three-year-old: Coffee Powered Mom.

I never watch videos, but I howled at this one. Henri the Existential Housecat. (Julie from Go Guilty Pleasures sent me this link.)

And again, I never watch videos, but this one is so awesome I sat through the whole damn thing and it makes me want to take a trip to LA. It’s worth your time. I’m linking through the blog I found it on, Steadily Skipping Stones: Caine’s Arcade.

I have a yoga towel. Nothing special- a fairly thick beach towel that I bought at Costco for fifteen bucks a few years ago. I store it in my closet, away from the family towels, so that I always have it when I go to yoga in town.

It covers my yoga mat perfectly.

It has pineapples on it.

The kids all know it’s my yoga towel. I try to take care of the washing of it but sometimes it gets mixed in with the regular towels. They know if it comes through the wash they’re supposed to put it in our bedroom instead of the linen closet. This actually happens sometimes, depending on which kid finds it, how much they care, and whether or not they’re currently pissed off at me.

A while back, while frantically searching for my towel to take to class, I found it. In the kids’ bathroom. With muddy dog prints all over it.

At least, I hope that was mud.

So I grabbed another towel. It was a thin, innocuous-looking beach towel. A bit girly for my taste- kind of looked like there might be butterflies on it, but I thought, what the hell. 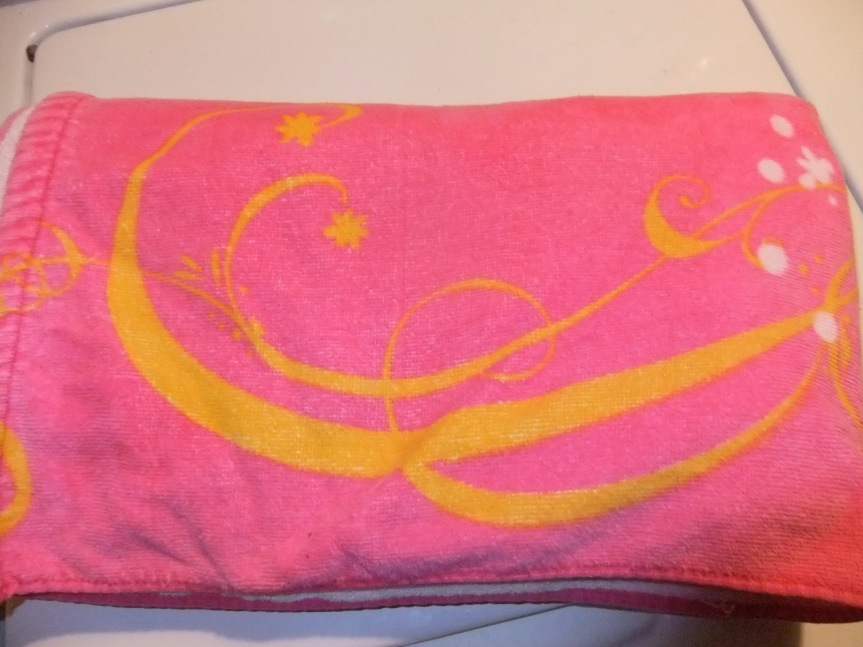 A towel is a towel, right? If I’m worried about my damn towel in yoga class I clearly have more serious issues.

And I did, in fact, have more serious issues, as I discovered when I got to class and flung the towel out over my mat.

CC mentioned to me on our way in to work the other day that I needed to put a post up explaining myself and my absence. As if somehow I were unaware that I haven’t posted on this blog, Facebook and Twitter for like three weeks now.

He said I needed to let the people who follow my blog know what’s going on. Apparently both of you are worried about me.

So here’s a story:

I go in to the city early one day to hit a yoga class before work. I drop my bags at my work area and go into the bathroom. Remember that I work in a theater.

The bathroom is in the basement and is, as my sister would call it, a one-butt bathroom. I d0 what I need to do, wash up and go to leave. I grab the doorknob, pop the lock and turn.

The doorknob spins in my hand. Loosely. Ineffectively. I would go so far as to call it impotent and flaccid, even though it’s a doorknob. The doorknob isn’t doing a goddamn thing. The door is still closed, and, somehow, still locked, even with a freely spinning doorknob.

Okay, I think, no biggie. I’ve been locked in far worse bathrooms than this. Plus, I’m a stagehand. Oh, wait. All my tools are at my work area. Not in here with me. As is my cell phone. Crap.

So I dig around the bathroom and find. . . a roll of paper towels. That’s it. No pipe wrench. No random screwdriver. Not even a goddamn plunger.

I start yelling and banging on the door to try to get someone’s attention, because people are actually in the building even though it’s the middle of the afternoon. The only thing is that I’m in the basement. They’re on stage, rehearsing. Far, far away.

I may as well be on the moon.

And suddenly I’m pissed, you know? I get dinner made early, I arrange a babysitter early, I pay extra for early parking all to come in early and take this goddamn yoga class and now I’m stuck in the frickin’ bathroom? Are you kidding me?

I’ll be damned if some doorknob is going to steal my peace.

So I start kicking the crap out of the doorknob. It takes a little while, but eventually the doorframe bends, the knob breaks off and I am free and I have exactly five minutes to haul ass down 8th avenue to get to my yoga class.

I drop the pieces of the doorknob off at the stage door on my way out and tell our doorman, Gus, what happened, apologizing as sincerely and as fast as I can.

I make my yoga class.

When I come back I have to endure a rash of crap from lots of people for breaking the bathroom door and leaving.

House Head Carpenter: I don’t get it. I don’t understand how you were locked in. The doorknob still works.

Me: But it came off! Completely! That’s how I got out.

House Head Carpenter: The door’s bent now where you kicked it, but nothing’s wrong with the doorknob. Even though it broke off.

Me: Dude. I don’t know what to tell you. I was locked the hell in. For like twenty minutes.

None of this has anything to do with my absence from all things social media. But it does explain these:

The old doorknob is still on the door and sometimes I forget and try to lock it instead of using the latch.

Don’t let anybody steal your peace.