The kids have an innate ability to sense weakness in a babysitter within the first thirty seconds of meeting them, and an equally honed ability to exploit that weakness at every opportunity. 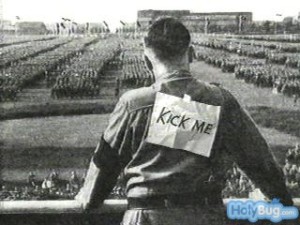 First there was Amy (not Hitler, above. I just liked the picture.) The daughter of CC’s accountant, she was a geeky, shy, fearful girl with heavy glasses to whom #1 taped a “kick me” sign. Yes, all the kids then proceeded to actually kick her, repeatedly, until we came home.

There was Pamela, whose greatest liability was that she just wasn’t all that smart. That’s a problem when you’re taking care of kids who are hell bent on creating a psychological obstacle course that you must successfully pass in order to move on to their next realm of torture. On her third scheduled shift she simply didn’t come. No call/ no show. Can’t say I blame her.

Let us not forget Rebecca, who dragged me into innumerable discussions about What Was Truly Wrong With The Children, and how she could help- all projections of her own issues. It would have been a kick in the pants had she been a psych major or something, but alas, she was merely a girl who was incredibly offended when she picked up and smelled the pile of dirty wet kitchen towels that I pile in a heap on the stairs rather than walk all the way up to the washer. Why would you smell a goddamn pile of dirty towels? Who does that?

Rebecca left after she cornered #2 and grilled her until #2 finally admitted that she didn’t like her that much. Rebecca called me in tears when I was in the Lincoln Tunnel on my way to a two-show day. She could barely get the words out. “I just (sob!) can’t. . . stay here (gasp!). . . when they don’t (sob!) like meeeeeeee”.

More than one sitter has lost track of more than one kid. Not because the sitter isn’t paying attention, but because the little heathens plan it that way. They scatter with timed precision like some kind of roller derby play.

They gang up. They misdirect. They sneak.

My worst parenting has come out in these situations. The kids are pleased as hell when they get rid of a sitter they don’t like. We get pissed, not only because the inmates aren’t allowed to run the asylum but because at times, the ones they hate were the only option. We’ve grounded. Withdrawn privileges. Given extra chores. Spanked. Yelled. Without a single lasting effect.

The hyenas sense the weak wildebeest, work together to separate it from the herd, and attack. You can take the hyenas’ video games away, make them clean the garage, and give them an earlier bedtime, but they’re still going to attack when the moment is right.

It’s in their nature.

But the hyenas always have each others’ backs. The kids are never more united than when they’re trying to get rid of a sitter they hate. When you get down to it, I respect the hell out of that, and I’m finally a little bit proud of it.

2 thoughts on “They Can Smell Fear”