#5 has a note from school that he needs to bring in some “kid-related” magazines, with pictures that he can cut out. A secret second grade project.

Me: What kind of pictures are they supposed to be?

“Kid-related” magazines. With pictures of Things That He Likes.

Call me unfit, call me an abomination, call me a commie bastard, but nothing like this exists in my house.

There are seventy-three Victoria’s Secret catalogues that came in the mail over the past two weeks and one from Cheaper Than Dirt Ammo. AOPA Pilot, Live Sound, Colorado Outdoors.

#2 pays for her own subscription to M, evil tween pop culture mag. I suggest this as an option, but #5 is firmly unwilling to bring in pictures of Justin Bieber and the Jonas Brothers. I try to start a fake argument with him about how he’s being unreasonable but CC is not amused.

The gift subscriptions to National Geographic Kids and to Highlights he loves, but the pictures in them aren’t of things in his top 10 list. He likes candy. He likes video games. He likes to talk.

In my defense, we went to the drug store in my town with the best newsstand.

Parenting magazines, where pictures of candy weren’t allowed and the only video games were of the educational variety.

More pictures of bikini-clad models looking desperately in need of a sandwich than I could count.

Me: How about a tattoo magazine, buddy? This one looks pretty cool.

Me: It’s okay, buddy, I’ll go through the catalogues again when we get home. You want a candy bar?

Candy’s my answer for everything.

I picked up the mail when we got back. It was evening, but the mail was still out because as I have mentioned before, no one in my house but me ever gets the mail, even though you physically come within an inch and a half of the mailbox when you walk in the front door. Mail score! An Oriental Trading Halloween catalogue! No video games, but plenty of candy and creepy, gorey Halloween decorations. #5 was thrilled.

So they did this secret project in class with the pictures. Apparently, they displayed the projects in the hallway at school for a couple of weeks but I was unaware of this because he didn’t tell me and unless otherwise compelled, my interaction at their school only involves me walking them to the end of the driveway, checking both ways for traffic, and nudging them across the street.

#5 finally brought his project home. He was so proud of it. The teacher had done giant silhouettes of the kids and then they were to cut out the pictures of “the things they liked” and write what their goal was. As in, lifetime goal. Like, what I wanna be when I grow up.

The pictures were supposed to be related to this lifetime dream of achievement.

And I sent my kid in armed with a single Oriental Trading Halloween catalogue. 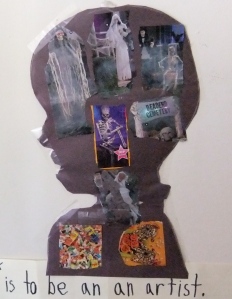 Here are some closeups so you can fully appreciate this.

He still has it hanging on his wall.

8 thoughts on “Because of course I have that laying around.”