So I turned 40 in March. I knew it was coming. Something like that doesn’t exactly sneak up on you. You’re aware.

I’ve heard people get all philosophical about “age is just a number” and “you’re only as old as you feel”. I know many, many people who lie about their age, or just pick one that they like and stick with that forever.

I’m not all that philosophical and I don’t go in for pithy sayings or Stuart Smalley-esque affirmations. But I’m here to tell you something:

I totally would not lie to you. Not about this.

See, I have a theory. I developed this theory ten years ago when I turned 30. Somehow the turning of a new decade in my age gave me a lot of freedom that I wasn’t expecting. It meant starting anew, at the beginning of a new set of numbers. I no longer had to fit into my idea of what the previous set of numbers had been- I’d outgrown them and passed them by. The new numbers were unwritten. A vast, empty space, waiting to be filled with whatever I chose.

Here’s my Top Ten List of what rocks about 40:

10) I have 40 years of experience in screwing up. It’s no big deal anymore.

9) I have 40 years of experience in figuring out what I like. That’s awesome! Do you have any idea what a time-saver that is?

8) I give a shit about my health. More than a shit, actually, I care a great deal. I eat on the healthy side, have little interest in chemically preserved/highly processed anything, do not actively put toxins (including chemical recreation) into my body anymore, take those damn supplements the doc had been suggesting the past five years, and I exercise. Very little gives me greater pleasure than standing in a Bikram yoga class next to some perky co-ed who was out partying all night and watching her go green down on the mat while I’m solid, holding standing bow. Take that, size zero.

7) I’m not above being petty when it amuses me (see above).

6) I don’t spend much time trying to figure out how everything’s going to work out anymore. My god, I used to make myself crazy with that. It’s far more interesting to just do the next right thing in front of me and let it all unfold as it will. All my worrying and trying to guess what comes next never affected the rising of the sun or the pull of the tides.

3) I know the value of a good cry and a day in bed with a bag of cookies.

2) I appreciate and can accept my family of origin just as they are. By this point, I don’t expect them to change much. They would probably say the same about me. But they’ll have to get their own blog.

I’m looking forward to testing my theory with each new decade I reach. But I’m in no rush.

I’d love to hear the number one thing that rocks about the age you are right now.

I was lucky enough to have multiple birthday celebrations, which I’ll be writing about this week (yes, I’m totally milking it).

My garage, two years after moving into this house: 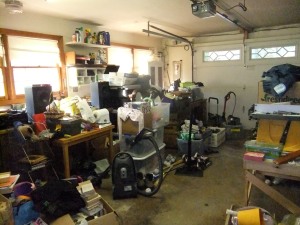 At least you can walk through it now. That’s an improvement. I’m happy to provide the public service of letting you feel better about your own garage, or whatever other room of dirty secrets you may have in your house.

Sweet, sweet Miss Lucy. I still owe you an alternator. I’m a bad mama. Hey, what’s that on the wall? 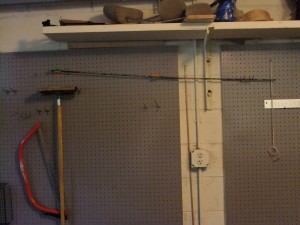 No, not the hacksaw. Not the push broom. The long thing straddling the boards, IYKWIM.

Oh, this is new. It came home today with CC. Here’s the part where I win the husband contest, even though my garage (which is all my mess anyway, not his) looks like the Room of Requirement.

The back of an arrow:

The front of a different arrow: 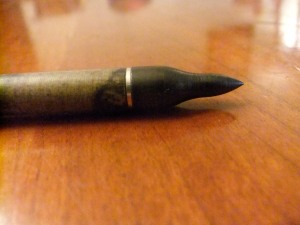 The front of the first arrow shot into the back of the second arrow: 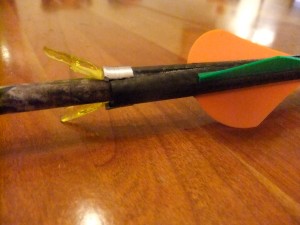 Splitting an arrow with another arrow was the only way CC could drag the range attendants’ attention away from #2, who was with him and is a fine shot herself. For some reason, the old guys there are more interested in a pretty fifteen-year-old female archery protegé than my handsome husband.

When he asked about repairing the arrows, they kind of looked at him and said, “We might be able to fix the back one, but really? You should hang that up on your wall. That’s a trophy.”

The kids and I don’t think the pegboard in the garage behind the Mustang is a good place to display a trophy. They all agree, it’s wicked awesome. We’re exploring other options.

I’m wondering where we can display Dad’s archery talents to have the greatest impact on potential teenage boyfriends. Any ideas?

Wait, are you judging me for the not getting the oil changed part, or the owning a minivan part? Because we actually own two minivans. But I also have a ’66 Mustang convertible named Miss Lucy, so get off my ass. 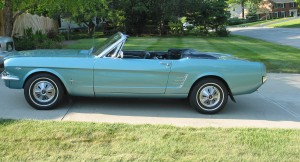 Anyway, we dropped the minivan off for the oil change and to have them check out the power steering, and discovered it also needed practically everything else except for a new engine, a new transmission, and new headlights.

So I put up my 401k as collateral and they began working on it. It took a little while, which brings us to Friday. CC had to be at work early, #1 was going to an amusement park, and I was on my own to pick up the car.

Meanwhile #3 was down with Swimmers Ear and we were out of pain reliever so I had to be speedy. I decided to multitask, and jogged down to the dealership, which is only about two miles away.

I used to live in Arizona, and I used to run for real there. Outside. It’s hot, but dry, so as long as you don’t outright incinerate, you can breathe.

This is probably also the time I have to mention that I’m a sweater. It’s gross, I know, but pertinent to the story. I sweat far more than the average human when it’s humid or when I exercise. Lucky for all of us, yesterday both of those applied.

I go into the service center and it’s packed. Full of people mainly in business suits trying to get their cars together to take on trips for this holiday weekend. There’s a counter with juices and tea and bagels and toast. I grab a paper towel from the basket to mop my brow and go stand in line for Rick, my friendly service representative.

As I’m standing in his line, I begin sweating in earnest. People are starting to cast disparaging sideways glances at me. I’m kind of dripping on the floor and I’m afraid some of it is audible. I only wait about ninety seconds for Rick but during that time, my sad paper towel has become the size of a cotton ball, is totally soaked and shredding because I keep trying to use it in a futile attempt to not look like a completely inappropriate mutant.

I’m trying to act like nothing unusual is happening. “Um, I ran over here.”

He stares at me for a second and then says, “Oh, literally!”

Rick then politely ignores my little problem while going over all the fabulous expensive things they did to our car and I’m just dying a little inside because I can’t stop sweating. Have you ever tried to stop sweating? Totally ineffective.

By the time he’s done, I look like I’ve just completed a Bikram class. My only saving grace is that I don’t know anyone here. We get to the part where I have to write a check. I had jogged over with this little wristlet thing that could hold only my license, my phone, and a check. I need a pen.

So I ask Rick for a pen. Somehow, there are none on the counter. I can tell he is debating whether to offer me the pen in his pocket or go find another one. After the briefest of hesitations, he says, “Here, you can use mine,” and hands it to me. I joke back, “I’ll try not to sweat on it,” because we both know that isn’t remotely possible. Then I look down.

Rick, god bless him, has handed me his Montblanc.

Have you experienced any extraordinary customer service lately?

Remember to enter the inappropriate puggle caption contest. The fabulous prize is your very one,  twice viewed DVD copy of Mega Shark Versus Giant Octopus.

#2, #3, and #5 watched it last night. #5 gave it this stellar review at several points during the action scenes: This movie is awesome!