We, personally, are unscathed. We had more damage during the non-storm on Memorial Day when three trees fell on our house.

The estimate is that 150 trees are down in our neighborhood, but our only inconvenience is that we don’t have power yet and probably won’t for another week.  Gas is hard to get and the commute into the city to work is a different adventure every day.

But the grocery store is open and stocked; we have hot water; the stove works. We even have a generator that runs as long as we find gas for it. By all counts, we’re lucky as hell.

Yet even that is enough to send me over the edge. The logistics of day-to-day living have never been my forté, ever, long before I somehow became responsible for helping with the logistics of six other people besides myself and two dogs. Now it’s all about logistics and it takes all my energy to make anything resembling normalcy, and I feel like a complete asshole as I stare down my limitations; limitations both in my attitude and what I’m able to make happen.

Because this is nothing like narrowly escaping your house after it breaks into three pieces and gets sucked into the Atlantic. It’s nothing like having your two children swept out to sea right out of  your arms. It’s not a damn thing like losing everything you own. It isn’t like having your houseboat now docked in someone’s back yard, seeing your drowned neighbors pulled out of their attic, not having access to clean water or food or heat anywhere, or dealing with how the hell you clean up when on Tuesday the sea was in your house halfway up the second floor.

I’m very lucky and it’s time to start acting like it.

Jersey Boys is going to be part of the telethon tomorrow on Good Morning America to raise funds for hurricane relief. We sure would appreciate it if you tune in and give a donation if you can. The cast is arriving pre-dawn, I’m arriving pre-cast, and the guys that run the show get there some time around one a.m. (even though they don’t have power either and their commute is also an adventure). 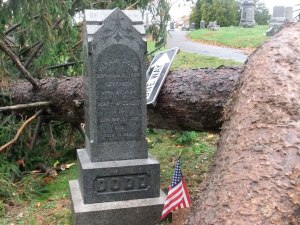 Here’s where you can donate to the Red Cross.

To help find gas in the area, check out GasBuddy. Twitter is a good resource as well; this article lists several potentially useful Twitter handles. Your local paper is also a good bet.

Crazy-ass pictures of the hurricane’s impact on the city: The Grist

We all need to laugh, and sometime can stand to change our stinky attitudes. Here’s one of my all-time favorite posts on Hyperbole and a Half: Sneaky Hate Spiral.

The best remedy for a sneaky hate spiral is gratitude, and I have an awful lot to be grateful for. Here are two, illustrated:

As a direct result of last year’s storm, I have a tiny pumpkin growing in my “yard”!

For Jack, everything is business as usual.

I would love to hear what you’re grateful for. Happy Sunday.