If you are a woman who wears lipstick, or if you have ever lived with such a woman… or worked with one… or sat next to one on a bus… or passed one in the street… you know that at some point, lipstick tragedy occurs. The arch-nemisis of every perfect shade of lipstick is one word- just twelve letters that fill the aforementioned lipstick-wearing women with fear and rage:

Every time you find your new perfect shade, you think this time will be different.

It’s never different. You may be lulled into a false sense of security for a bit, but after you’ve used up and re-bought that lipstick a maximum- yes, maximum, and that’s only if you’re very, very lucky- a maximum of two times, it is always discontinued. Always. And the hunt begins again.

You may start your hunt on eBay or Amazon, but if you’re like me, you’ll be late to the party. Everybody else already knew it was going to be discontinued because they followed that shade on Twitter, while you were trying to keep Twitter “professional”.

You have no choice but to continue the hunt in the field. It’s scary and uncomfortable and you don’t like to do it, but you do it anyway.

You put on pants and go to the mall.

This is precisely how I ended up with the most expensive lipstick I’ve ever bought. I took my sad, empty tube of Ruby Vibes into the supermegafacepaint store and pleaded for help.

“It was perfect,” I said. My eyes were welling up.

“Oh no! Discontinued,” the lady said with an empathetic nod. She handed me a tissue and I dabbed my eyes. “I’m so sorry, honey.” Then she took me on a tour of 50 shades of almost-but-not-quite Ruby Vibes.

Touring lipstick shades involves getting many swipes of testers on the back of your hand. Depending on the shades you’re testing, you start to look like either you’ve gotten into an altercation with a feral cat or else you really need to go see the dermatologist, like yesterday.

Somewhere around shade 36, my sales lady showed me a great color. I dismissed it immediately because of the price, and carried on through the rest of the tour. But it stuck with me.

It was wine, but bright. The tiniest bit of iridescence in indirect light, but not a shimmer, not a sparkle. A hint of berry. It was, dare I say it? I do. It was better than Ruby Vibes.

I pointed to the slash on my hand. “This one? Can I see this one again?” She knew right where it was and led me back.

I made another line on my hand and held it up by my lips and looked in the teeny mirror. My hands looked like I’d been fondling barbed wire and razorblades but this one stood out.

She opened a brand-new tube in right in front of me and dialed it up so I could see that sharp, slanted edge that always gets me more than a little too excited about a lipstick. Completely seduced, I bought it. 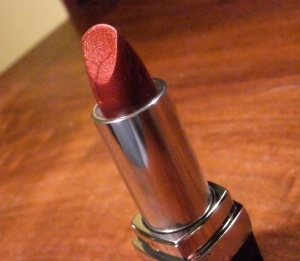 I have a friend who is the kind of friend everyone should have. The one who is always on board with your impulsive, extravagant purchases; your perhaps not carefully-thought-out schemes; your bold decorating ideas. I once called her in a panic because I found myself in Nordstrom’s shoe department seriously considering buying either a pair of peep-toe calf hair Kate Spades or a pair of sueded art-deco Marc Jacobs mary janes.

She talked me off the ledge. I bought both. (This was before I had children. Duh.)

Naturally, the first thing I did after buying a $32 lipstick was to hit the Godiva store and text her.

Me: Wait til you see it! It’s awesome!

She’s just jealous because Daisy Plum is not her perfect shade. Besides, I know for a fact that she has spent $28 on a lip gloss, and I don’t see what the difference is. (I mean beyond four dollars. I can do math.)

I stand by my purchasing decision. This is the kind of lipstick that when I wear it, people ask why I’m all dressed up when I’m actually just wearing jeans and a t-shirt. Also, it opens doors. Observe:

I work in a theater next door to a concert venue. Sometimes when a band plays there they’re trying to use the same frequencies we do for our wireless mics in our show. We have to go talk to them and get them to change frequencies to avoid disaster (picture, if you will, a touching dramatic scene of a father mourning his dead daughter interrupted by a crass and loud “CHECK ONE TWO!!”).

It’s a touchy operation, because most rock and roll sound guys aren’t used to having to do frequency coordination; they’re used to being the only thing happening in town that night. They’re usually behind schedule, understaffed, and haven’t had enough sleep.

The day Guns-N-Roses played next door, it was deemed my turn to go tell them they had to move their frequencies. I’d been working in the shop all day and was dirty, tired, and decidedly uncute. But I did have Daisy Plum in my tool bag.

I used the $32 lipstick/walkie talkie/work boots approach. (It’s highly possible I may have used lipstick to get backstage to a GnR show in the 80’s, but that’s a little fuzzy.)

I talked my way right in, smiled at everyone and got to the right guy. They were all friendly. They got off my frequencies. They moved their shizz and were nice about it.

About ten years ago when I was on the road, I remember a waitress I had in Rochester whose only adornment was her lipstick. She wore no other makeup, her hair wasn’t anything special, she had no jewelry; but her lipstick was perfect. I’ve never forgotten her.

Though I’ll bet you $32 her shade has been discontinued.