#5 was complaining of a tummy ache this afternoon. He also had a boo-boo, but he wasn’t complaining about that, because he had this:

A bacon bandaid, sent to him by loyal reader and fan of #5, my friend Genny. As we all know, bacon makes everything better. It’s a logical choice for a bandaid. We have found the bacon bandaids to be more effective on boo-boos than kisses.

CC set him on the couch and brought him a glass of water and went back to making lunch.

That? Oh, that’s fifteen pounds of bacon. Minus lunch already in progress. 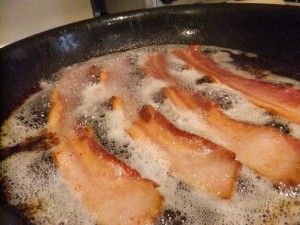 (If you’re lucky enough to live near an Original Pancake House, you may be interested to know that you can now buy their bacon by the case for four dollars per pound. Around here, that’s way cheap for bacon, and it’s damn tasty.)

CC: You are correct. Would you like a piece?

CC: What about your tummy ache?

CC: Have you eaten anything today?

CC: Anything at all?

CC: Remember yesterday when I told you that you were going to starve to death playing video games because you wouldn’t stop to eat anything?

CC: That’s why you have a tummy ache.

CC’s plan was to make everyone BLT’s for lunch: 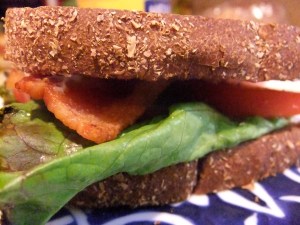 Isn’t it lovely? I saw a blurb on TV once about food photographers and all the creepy things they have to do to their food to make it photogenic. I think of that every time I see pretty food in advertising. It makes me want to take a shower. This here is undoctored bacon, folks.

Of course you don’t.

I loves me a good BLT. But something else was speaking to my soul today:

Peanut Butter & Bacon. I make it a point to try to turn everyone that I meet on to the PB&B (unless they have a peanut allergy or don’t eat pork, in which case? More for me). Most people initially put up a lot of resistance. Those people are merely unenlightened, and as a PB&B disciple, it’s up to me to show them the path to true happiness and peace of mind.

CC: What about peanut butter and bacon?

CC: Stop that. Both of you. Here, eat your sandwich.

What do you say- PB&B: enlightenment or blasphemy? What’s your favorite way to eat bacon?

59 thoughts on “This sandwich will change your life.”