Welcome to One and Done Sunday: one picture, and five links that are worth your time.

Don’t fret, I’ll carry on milking my 40th birthday with my next post. I would like to say that this picture is a sign of my maturity, my newfound ability to not kill growing things in my garden. But really I think the credit goes to advances in horticulture technology: 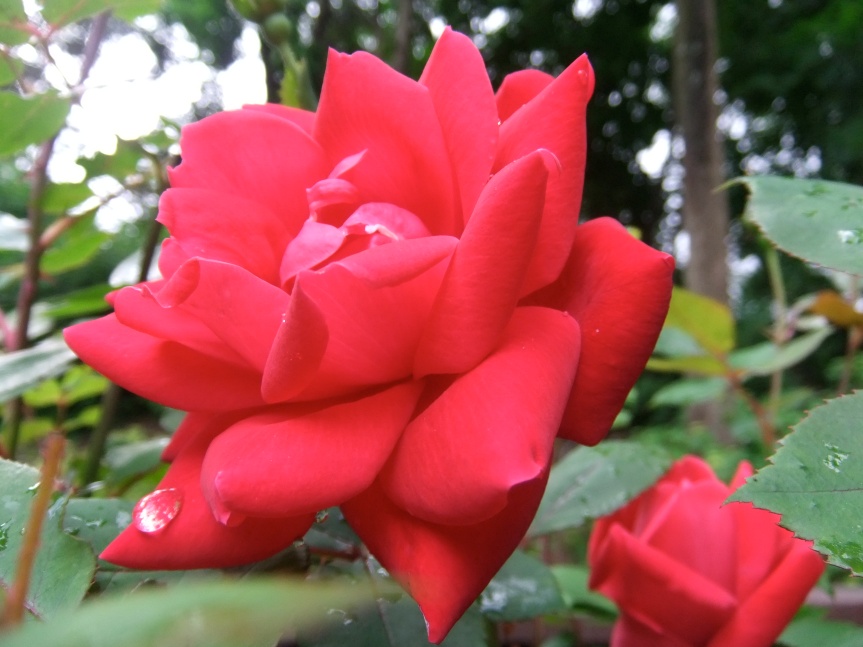 The knockout roses we have have been through a hurricane, an October blizzard, and three winters of oh crap, we didn’t winterize the roses and they’re under nine feet of snow.

They don’t seem to be terribly bothered by any of it. I never knew how much I would love going outside and seeing roses there. It’s very cool, kind of like getting flowers every day for no reason.

Yesterday at work, before I left to meet CC for dinner between shows, I lightened my bag. The last thing I removed was my umbrella. Shockingly, there are no windows in theaters and I couldn’t see the sky. I went out a side door and saw one guy carrying an umbrella, but he was prancing a bit and it being New York and all, I thought it was merely an accessory. Then I saw others with umbrellas, then I felt the rain. I turned in slow motion to watch the side door–which opens only from the inside–close. If I wanted my umbrella, I would have to plow through the crowd at the stage door and walk all the way around the building again. So I chanced it.

It didn’t rain much, it wasn’t a big deal. At least, not until after dinner. About three blocks from work it started raining more. Then it poured.

Did I mention I was wearing white pants? I was mostly see-through by the time I got back to work.

I passed a complete stranger who actually laughed out loud at me.

And you know what? I really didn’t care. It was pretty funny. Chalk that one up to 40 too.

CC sent me this link of before and after pictures of East Germany. This photographer took pictures immediately after the wall came down, and then again ten years later. It’s astounding. Pictures by Stefan Koppelkamm: A Massive Facelift for East Germany.

Melissa Stetton is a model with a blog that I totally dig. I don’t know her and if she’s noticed my comments at all she probably thinks I’m a stalker, which is sort of appealing. Here are her recent thoughts on doing a photo shoot nearly naked in Central Park in 55-degree weather. Pretty Bored: You Chose to Be a Model, Deal With It.

I loved this post for so many reasons. Life Well Blended: On Being the Stepmom on Mothers Day

Welcome to One and Done Sunday. One picture and five links that are worth your time.

I got to spend my break between shows Saturday with one of my best friends that I don’t get to see often enough. We went to my favorite Indian restaurant and the food was so spicy I was swearing at it, which is pretty much how I define good food. It was divine.

That has absolutely nothing to do with anything except that I’m eating the leftovers right now. Holy sh*t that’s good! The puggles are also trying to eat my leftovers. Which would be amusing, but sooo not worth the cleanup. 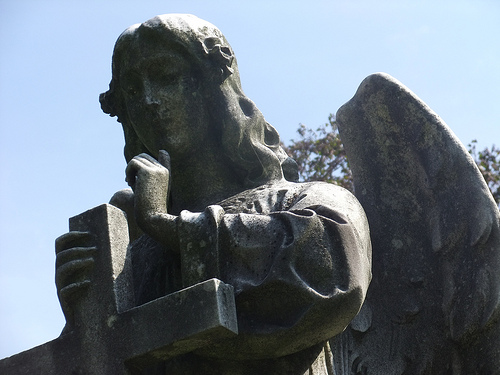 An angel from the cemetery where we get to walk the pups. It’s one of my favorite places.

Here are your links:

Melissa Stetton, the anti-model fashion model: Pretty Bored. She’s also a pretty great photographer in her own right (thanks for the links, Deathrow)

Cleaning up New York. One asshole at a time. [I keep swearing. I’m blaming the Indian food. Damn, that’s good.] An Angry Gladys video on My Parents Are Crazier Than Yours.