Earlier this spring, both #4 and #5 went home sick from school on the same day. This type of thing happens only when CC is out of town, and then most often on a Wednesday, my longest work day (for the record, snow days work like this too).

I called my sub in to cover me and made it to the middle school in record time. We got home with no hurling, and when they felt up for it, I heated up some chicken soup, pulled out the saltines and ginger ale and joined them at the table.

The nurse had told me more than 25% of the kids were out sick with the bug that was going around.

Me: I like your nurse at the middle school.

Me: Whatever happened to “me too”?

[They stare at me blankly.]

#5: The middle school nurse is way nicer than the one at the elementary school.

Me: Yeah, that one scared me. She yelled at me.

Me: Pretty much. You showed me this teeny-tiny spot on the top of your knee where you had poison ivy and I gave you Caladryl, but you neglected to mention that the back of your legs were completely covered with it and festering. Then you went to the nurse.

#4: Oh yeah, I remember that. I though they were bug bites.

Me: Yeah, well they weren’t. She screamed at me when she called. I kept expecting DYFS to show up on our doorstep for like a month.

Me: Festering is gross, that’s what.

#4: I remember I got poison ivy on my eye one time.

Me: When I was a kid, I got it on my whole face and my eyes swelled shut. It was awful. Though I wasn’t as bad off as my friends. They went to the bathroom in the woods and used poison ivy leaves to wipe.

[They look, horrified, in my direction.]

Me: Yes, I actually knew people that happened to.

[They look, horrified, at each other.]

Me: They got poison ivy really bad. In their … ah… nether regions.

Meanwhile, I have a couple posts up on Family Circle’s Momster blog.

When you’re a stepmom of teenagers, you have to expand your definition of parenting wins: Treasured Moments

Attempts to teach a reluctant worker the value of a job well done: Hey Kids, Guess What? Money Doesn’t Grow on Trees! 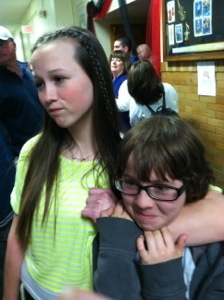 So, ah… where’s the worst place you ever got poison ivy?

14 thoughts on “If You Weren’t Sick Before…”