I got to participate in a very cool event yesterday.

No, not the elementary school choir/band/orchestra concert. While that was very cool and included such excellent moments as modified gansta-rap choreography from suburban 5th graders, plus interpretive intonation and rhythm as can only be delivered by first-year ensemble musicians, that event happened the previous evening.

The very cool event I am referring to is Meredith Corporation’s Day of Service with Rebuilding Together at Gerritsen Beach, Brooklyn. Lisa Mandel at Family Circle invited me to come along, so I put on my work boots and a cubic meter of sunscreen, got on a bus with a bunch of Meredith employees, and headed out to Brooklyn.

I met some truly excellent people and witnessed tremendous heart and talent at work rebuilding this particular community that was so unexpectedly and heavily damaged by Hurricane Sandy.

Yeah yeah, I know, they officially dropped the “hurricane” title and qualified it as “superstorm”. Whatever. I didn’t have the harrowing experience of four and a half feet of water rushing into my home like these folks did–we were up all night hoping the trees crashing down all around us wouldn’t hit us, and watching the sky light up as transformer after transformer blew.  I think we agree it doesn’t much matter what the official name is. 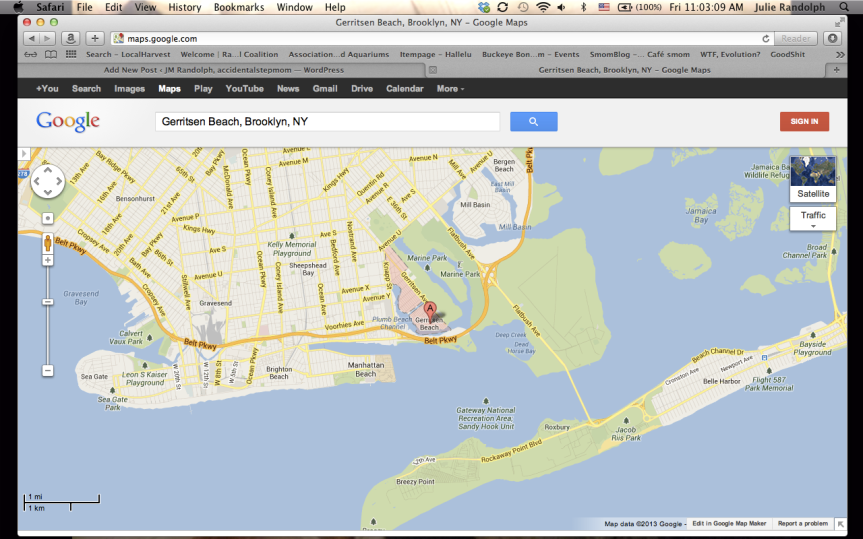 When you look at the map, it doesn’t seem like Gerritsen beach would have been hard hit by the storm. After all, there are two land masses between there and the ocean, not to mention a major freeway. And that was precisely the problem: by all appearances, this storm didn’t seem like it was going to be too bad for them. They weren’t even supposed to evacuate, so they didn’t.

The ocean apparently didn’t get the memo, and pummeled them with a wall of water that flooded their town. Between four and six feet of flowing water ran in the streets, in backyards, in gardens, in homes.

Rebuilding Together targeted specific homes and community areas to rebuild in Gerritsen Beach, and yesterday Meredith organized and brought in several hundred employees to help. Lowe’s and Crate & Barrel were among the others on site.

I have a couple of real posts coming up about yesterday’s event, but for the moment, here are some pictures of the accidental improvements we did on a roly poly bug:

Even though he matches the paint on my Mustang now, he opted not to come home with me. It’s really for the best.

Look for more posts about Gerritsen Beach from me shortly. Meantime, please visit WeRebuild.com because it’s super simple for you to help out. I promise you don’t have to paint any bugs.