Between Irene and Sandy, we had Snowtober. Halloween 2011. A not insignificant portion of a tree that technically belongs to the county but hugs my property line cracked down and blocked the street for a few days.

The people we bought the house from had been trying to get the county to take it down for years. The neighbors also, particularly the guy whose house it was leaning towards.

Being that my county is large and includes Newark (which I affectionately refer to as the hole of the ass), the county was unimpressed. And unresponsive.

Until halfway through January 2013.

I’ve never been so happy to see something die.

Before I get any hate comments from tree-huggers, let me just say that I WILL approve comments that call me out as hating the environment IF AND ONLY IF you have had three or more trees land on your house in a six month period as I had here, and here.

I watched the whole thing go down in thirty minutes. Had they not been blocking my driveway I would have pulled #5 out of school to see it, it was so fricking cool.

What you can’t see in this shot is the additional twenty feet of tree that hangs over the road. 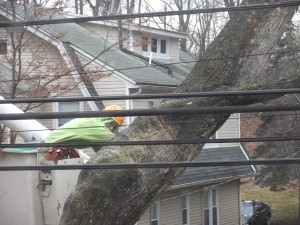 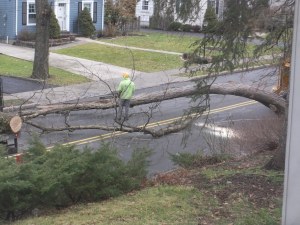 That would be the bit you couldn’t see in the first shot. 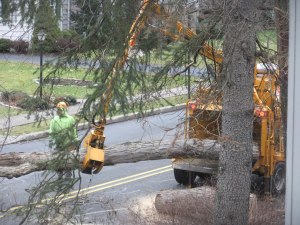 Had we been thinking, we would have marked the giant dead pine tree with a red X too.

11 thoughts on “Marked For Death”