We have a Screen Ban at our house from 11am-5pm. This is a new thing for us, just started the day after school got out for the summer. Music is allowed during this time but no other internet, no TV (exception granted for the Olympics), no video games, no movies.

It’s been a good move, though the kids might beg to differ. Of course it isn’t perfect- they complain, sneak whenever our backs are turned, watch TV at friends’ houses. But other things have happened too. Sometimes they’ll hang out on my bed and read while I’m folding laundry. The dogs get an extra walk. We go to the pool. They play board games. They help me in the kitchen. They make stuff up.

#5 asked if he could make a fort recently during the Screen Ban hours. An indoor fort.

I was a big fan of forts when I was a kid, both indoor and outdoor. Indoor forts we made by stringing sheets and sleeping bags over artfully arranged furniture. My sister’s brilliant contribution was the addition of a box fan, placed just so in order to extend a sheet into a “room”. Outdoor forts we made with whatever wood we could find in the patch of woods behind our house: scrap lumber, branches, sticks, logs. Outdoor forts rocked because you could add to them over the days; you didn’t have to dismantle them to give your mom the sheets and chairs back.

#5 mostly makes indoor forts because we don’t have a yard or woods per se, unless you count the property that doesn’t belong to us and contains all the trees that keep landing on our house. He did make an outdoor fort once but I literally couldn’t get to it when he wanted to show it to me, it was in such a steep and treacherous part of the “yard”.

He wanted to make a fort this day upstairs, and offered to take it down before dinner because it uses all of the dining room chairs. He didn’t want to make it downstairs in the music room because #2 was down there and, I quote, “She’s really annoying when you’re trying to build a fort.”

If you asked her, she would probably say the same thing about him.

Once he made the fort, he started working on me to let him sleep in it. He even offered to take it down so everyone could eat around the table and then rebuild it. I’m just so thrilled any time something non-electronic happens that doesn’t involve arguing or tears that I relented. It was pretty cool- it came out round inside.

When I got home from work, it was odd how dark and quiet the house was. The dogs were crated, #4 and #5 were asleep in the fort and the sitter was on the couch using her laptop. We said goodbye in whispers but the dogs woke up anyway.

The dogs were so totally discombobulated by the fort. They whined in the crate because there were nearby laps they weren’t in. I let them out to take them outside but they beelined for the fort instead. Except Jack couldn’t figure out how to get in it, so I helped him.

Then came a series of nails on the floor and much dog activity. In and out and all around the fort. I took them both outside briefly but afterwards neither one would calm down at the same time, all the while crawling in and out of the fort and on #4 and #5’s heads.

I went to forcibly remove them, but #4 protested sleepily and said that Casey was under the covers, which she was. Somehow Jack also ended up naked, which makes him harder to grab because he’s quite wiggly and there’s nothing to hold on to when he’s naked. Well, nothing good anyway.

I told them if the dogs got too annoying to put them back in the crate and went back in our room to read.

One of these days I’m going to record that. It defies description. My friend Jeremy, who is owned by two pugs, refers to it as “weaseling”.

#4 and I opened my bedroom door at the same time.

Me: Are they being annoying?

Her eyes were wide and she nodded vigorously: Yes!!!

So I let them in and squished their little heads together in an embrace, reminded them I was the big dog and told them to calm the hell down.

Everyone slept after that. #4, in fact, managed to sleep until ten a.m. which earned her this picture that she doesn’t know I took.

I noticed she also added a fan. Aunt Beth will be proud. 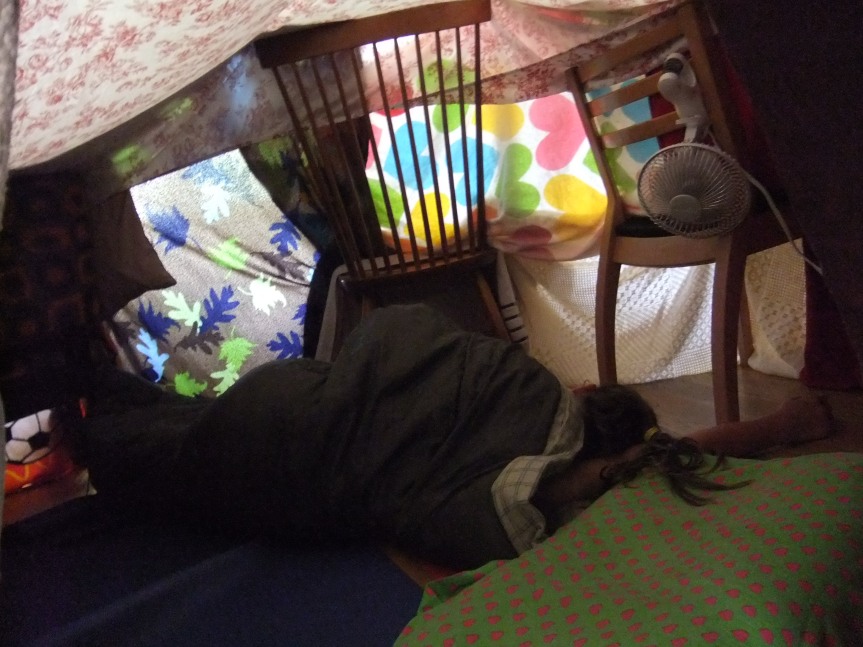 Did you ever build forts as a kid? Is anyone else doing screen bans this summer? I told my chiropractor about it and he thought it was brilliant; then he told his kids and now they’re pooling their money to take a hit out on me.