My last day in Berlin I walked past a record store.

A real record store, with vinyl.

By myself, on my thirty-ninth birthday. I can’t begin to express exactly how much this thrilled me.

I flipped through nearly all the vinyl they had outside. For no good reason, I picked up a couple 45’s: Alice Cooper’s Elected and The Four Seasons’ Beggin’ (or, as we like to call it, Bacon). I also picked this up for CC: 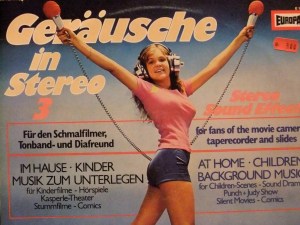 A German/English sound effects record, including background children’s noises for “Children-Scenes”, apparently recorded by a lovely young lady with quite a stereo pair. Because I couldn’t have made any of that up.

They also had CD’s. I went in, and by this time I had given up pretending that I was ever going to speak their language and asked the lady behind the counter in English, “What’s the best German band I’ve never heard of?” She asked me what type of music. She then gave me two CD’s, with a smile that held the universal excitement of turning someone on to music they’ve never heard before, and a very German “You MUST get these!” She let me listen to them but I was already sold.

From the liner notes for Ege Bamyasi: “Guitarist the late Michael Karoli later complained that the sessions were frustrated by keyboardist Irmin Schmidt and vocalist Damo Suzuki’s playing chess obsessively day in, day out.” As my friend Drew says: It’s like Meddle Pink Floyd did the nasty with Parliament Funkadelic.

Their liner notes are all in Germish. Here’s all you need to know: Metal, with multiple bagpipe players. Described elsewhere as “Folk/Medieval Metal” (that website also listed Carmina Burana as a lyrical theme. Which is also true.). They have been around since 1995 and I can’t believe something this awesome has existed for so long and it took me sixteen years and a trip out of the country to find it.

I’ve been playing that disc nonstop this week. This is our conversation in the van:

#2: Is this your weird Germish band again?

(repeat four more times with the other kids).

This link will take you to view the video on You Tube. I am pretty sure he raises someone from the dead in it. Plus they’re on a boat. And the dude playing the cittern or whatever the hell it is Robert Trujillo-style: brilliant. Again, I say to you: Germans are badass.