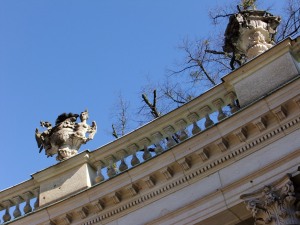 This picture is here for no reason except I like it.

Jetlag. It’s a better reason than normal for why I would be up at 4:30am. Once upon a time, 4:30am was an hour for going to sleep, not waking up. But since we got the kids the only reasons I am ever up at 4:30am all involve vomit.

So I’m happy for the jetlag. It got me hours of uninterrupted sleep, broken only by CC waking me at midnight with a dozen red roses.  Then more sleep only interrupted by the dogs waking up because they went to bed with me at 7pm and they really had to go out. I played the “I’m weary, I just traveled home” card to get CC to take them out. It was my only chance- I’m back on the clock tomorrow.

By the time they came back inside, I was awake. Plus I figure I’ve got at least an hour and a half before #5 wakes up to play Wii, so I’m takin’ it. Sorry for making you get up, CC.

Here’s how I was greeted when I came home:

I was fumbling loudly at the front door with my bags and also trying to get the mail, because for some reason nobody in my house but me gets the mail. I heard the dogs bark and the kids scream, having used their supernaturally fine-tuned senses to deduce that I was home.

When I opened the door, #4 and #2 were holding two very wiggly puggles that nearly jumped to their dooms because they almost wiggled out straight down the staircase, and #3 and #5 were in the living room crying because in their haste to make it to the door they smacked body parts, head to hip I think, hard. Then the Evil Brown One wiggled out of #4’s grip, bloodying her nose in the process, at which point the Fuggle also jumped out and both dogs stopped wiggling and proceeded to smell my suitcase intently, baffled by what they were processing. Apparently, they don’t sniff Germish.

I went past the pile of bags and puppies to see the Crying Ones. #3 had pulled it together and hugged me but #5 was still sobbing and holding his head. He also looked like he was foaming at the mouth.

“What in God’s name is on your mouth?” I asked.

Within three minutes, they were all re-absorbed six inches from the television in an episode of Wizards of Waverly Place that I myself have seen nine times and I don’t even watch TV. They forgot to ask if I brought them souvenirs. So I withheld them. Heh. I’m drunk with power.

But as the afternoon went on and I sat with G-Middy (my mom, who was watching them while I was gone), every one of them individually climbed into my lap chattered. Even the dogs, but that was more about slobbery tennis balls and rockin’ underbites.

It’s nice to be back.

I have more posts to come about Berlin, but I’m still processing. So I leave you with these:

Here are some more naked babies. These ones are gold. 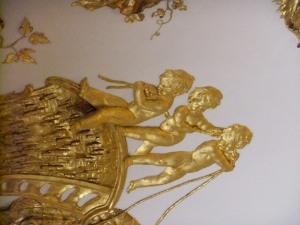 Interesting Things I Ate In Berlin:

Apple compote with mustard. There may have been some figs involved as well.

The international version of pig in a blanket: wurst in a croissant. This was my favorite thing ever. I would be nine hundred pounds if I lived in Germany.

The best bratwurst, potatoes, and sourkraut I’ve ever had in my life. Twice.

Steak Tartar. The German version makes the French version surrender, but I hear that happens with a lot of things. It was about a pound and a quarter (I’m sure there’s some easy metric equivalent) of raw German organic ground beef, topped with a raw German organic egg yolk, and it dared you to eat it.

Wiener Schnitzel, which is a pounded flat veal cutlet breaded with some heavenly popover-tasting batter. It looks like chikkenfriedsteak without the gravy.

Veal Dumplings. This is the point where I should tell you that at home, I don’t eat meat.

Currywurst, which they slice up and put a spicy ketchup on and then give you a tiny fork so you can walk around while you eat it.

Ritter Sport candybars, which I’ve always liked and can get at the deli around the corner from my theater but they’re fresher here. Also, by my hotel they had a store where you could make your own– kinda like the candy bar version of a Cold Stone.

The chocolates they leave at turndown service, which rock. I accidentally found the amazing chocolatier who makes them two blocks from my hotel. So I bought more. Did I mention I would weigh nine hundred pounds if I lived in Germany?

As for the rest of the title of this post, I leave you with this picture of an ad at a bus stop. Please tell me if you have any idea what it means. 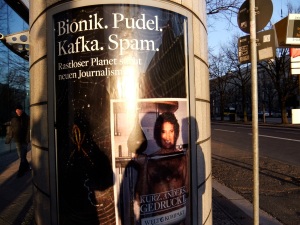