Soon after we got the kids, it became clear to me that #3 had full-on middle child syndrome. 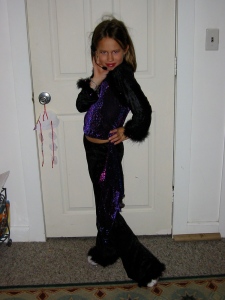 When she wasn’t posing, she always had something that needed medical attention. She would say things like, “My bellybutton hurts!” or ask for a bandaid for a pinprick that could not be seen with the naked eye.

At first, when the kids were coughing or sneezing or had a tummy ache, I’d take them to the doctor right away. Every time. Then I learned: I hate our pediatrician.

We ended up with this pediatrician because when CC was married before, they lived in the area with #1 and took her there. It’s a network of doctors with a large practice that has won all sorts of awards despite the fact that the experience of going to see them is akin to sticking needles in your eyes, then blinking. Rapidly, several times in succession.

You can never actually reach anyone in the office by phone- everything is done through answering services and messages. I’ve never seen the same doctor twice. It takes forever to get an appointment. It’s far away. Everytime you go in they make you fill out all the paperwork again. “Just to make sure nothing’s changed,” they say. I’m talking health history, people, from infancy. In other words, all the stuff I wasn’t there for and know nothing about. I always hand it back to them blank and say CC will fill it out the next time.

#3 had been complaining of a cough for some time. Let’s say two weeks. If you knew her like I did, and heard the pathetic little cough coming out of her, you might also be inclined to think, like I did, that she was faking. Nobody coughs like that in real life.

Then I got a cough. Which I ignored until I could no longer speak. I went to a clinic, because it’s easy. Bronchitis, they said. So I figured I should finally take #3 to the pediatrician.

I informed her doctor of my bronchitis. As she was listening to #3’s lungs, she said “Oh, mommy shared,” meaning me, and I didn’t correct her, because I couldn’t speak without coughing. “Pneumonia,” she said of #3.

Jesus. How did anybody ever think it was okay for me to be entrusted with these children?

We left and I went to fill her prescriptions. There was something the doctor needed to tell me, so they called. Her mom. Thinking they were calling me. Believing that we were one in the same. Which set off a whole other chain of events I’d rather not think about.

You can’t escape Karma. We both had antibiotics and #3 bounced back in about five days. Mine proved to be some vile, resistant bacteria which laid me up for four solid weeks, fever every day between 101-104 degrees, and the cough lingered for six months. I still believe to this day that it served me right.