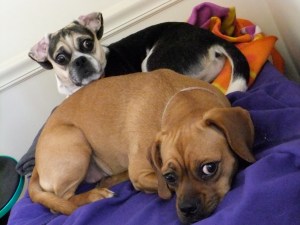 My single biggest regret as a pet owner is that I do not have pictures of the events that follow.

Disclaimer: Pet advocates, I am aware that dogs should be safely restrained in a moving vehicle. Rest assured I treat my puppies as I do my children. Heh. Safe driving advocates I remind you that this is New Jersey. In order to retain my New Jersey driver’s license I was obliged to create an unnecessary distraction because I couldn’t use my cell phone while driving this day, as one of the heathens stole my phone charger.

Monday morning. I have to take the puppies for their shots. They hate the car. It makes me question their authenticity as dogs.

We get in the van. They run all over, sniffing things and eating all the crap that the kids have left in the back. I would pretend that these are things that I’ve missed in my meticulous cleaning of the backseats and cup-holders, but I can’t keep a straight face and type that bullshit at the same time. The only reason the puppies do not eat the crap I’ve left behind is that I do clean out the front seat before I let them into the car. Because they might eat my chocolate, and that would be bad for all of us.

I put the car in gear and begin to drive. This is when the Fuggle starts to be very concerned. He cowers down and starts whining, then makes this soul-rending Beagle howl sound. Sometimes his mouth goes in a circle. I try to pull him to me but he clings to the seat.

Next, he tries to walk towards me. For some reason this is okay as long as it is his idea. His goal is my lap. He is thwarted by the laws of physics. I grab him at a stop light and pull him in. He’s little, so he’s not too difficult to steer around.

The Puggle has completed eating all the secrets she has discovered in the back of the van. She sees the Fuggle in my lap. She prefers to make her way there by climbing under my legs and dancing around the pedals but I block her. Being 30% bigger and more sausage-shaped, she’s more stable and less assulted by the laws of physics. She climbs from the console into my lap.

Now there are two puppies in my lap. The Fuggle continues to whine and howl. The Puggle merely shakes, and presses into me. Hard. The Fuggle is closer to my body and that’s where the Puggle wants to be so she adjusts herself, climbing in between us, until he pops out and I have to catch him before he falls to the gas pedal.

This is difficult to steer around.

When we finally reach the vet they are, at first, excited. So many sniffs! Gradually, beginning with the trauma of the automatic doors, they figure out where they are. They’ve been here before, many, many times. Nothing good ever happens here. They flatten themselves as much as possible. They try to dig their nails in to keep from moving, but the floor is like ice and I drag them along like deflated tether balls.

They get their shots. We get back in the car. Have much the same experience on the way back. At home they immediately fall asleep in their crate.

As Mondays often are, being the day off, this one is packed with obligations. I get back from shuttling kids around 5pm and I see the Fuggle, creeping gingerly to the top of the stairs.

He is walking as if he is in a lot of pain but also very itchy. Wide stance, slowly turning in circles like he wants to scratch but doesn’t know where to start. He looks weird. I take off my sunglasses. Holy crap. He’s completely covered in. . . hives? The Puggle isn’t in the crate so I go down to look for her. I am told that #4 is taking her for a walk.

Me: Did you see Jack?

Me: What about Casey? Is she lumpy?

I call the vet. I have to bring him in. On my way out, I see #4 across the street and make sure that the Puggle isn’t lumpy too. She’s good. So we drive, the Fuggle and me. He doesn’t make a single sound, except for a very heavy sigh when he lays down in my lap.

We get to the vet and as soon as he realizes where he is he tries to hide under a car, as if that will protect him, as if I can’t find him at the end of his leash. It’s a lost cause; he only weighs like sixteen pounds. Plus, he’s lumpy. The Fuggle simply can’t comprehend that he’s back at the vet for the second time today. This is the worst day of his life.

When I see him in full light, I can tell he’s a little less lumpy than he was at home, which is encouraging. They treat him but I have to leave him behind because they want to make sure nothing worse happens.

I cannot count the number of times I have had to leave one or both of the puppies at the vet like this. They’re not even two years old yet. Every time I leave, I see them in my mind, crying because I am abandoning them, their little dog mouths going in a circle.

I picture this most of the way home. I am worried about the Fuggle and feeling guilty about spending extra time away from the kids on my day off. I get home.

And see the Puggle walk gingerly to the top of the stairs.

One eye is completely swollen shut. She looks worse than the Fuggle did. Because she’s 30% bigger, it took her hives 30% longer to show up. Which is roughly the length of a round trip to the vet.

At the vet, she pulled the same move of trying to hunker down under someone else’s car when she figured out where she was. She shook so hard when I got her inside she was blurry.

They came out of it okay. They got de-lumped with Benadryl (note to self: try this at home next time and save three hundred dollars) and we got to bring them home that night. It was a grand total of four round trips to the vet for me.

My vet does not back their vaccines with some kind of warranty against reactions, nor offer a Second Visit In A Day discount. I asked.