On our drive home from work the other night, I was talking with CC about a book I’m reading, Cinders by Michelle Davidson Argyle (which is great).

Me: It starts in the Happily Ever After part of Cinderella, only it isn’t.

CC: What, like she turns into a man instead of a pumpkin?

Me: {sigh} That was the coach.

CC: She played softball with pumpkins?

Me: Are you finished?

Me: Anyway there are these peasant uprisings and there’s this whole thing about how love is a choice, and a bunch of stuff happens. . .

Me: How love is a choice?

He ignores my implications.

CC: You know what’s an excellent book? Gone With the Wind. You should really read that. 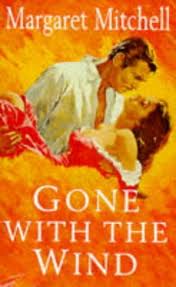 He reminds me, every time we talk about books, which is often, that I’ve never read Gone With The Wind. I’ve also never read Moby Dick, Pride and Prejudice, or War and Peace (or any Tolstoi to completion, for that matter) but he never mentions those.

CC: You know her daughter dies.

Me: That’s sad. Wait, she was married?

CC: If you read the book, you’d know.

CC: She’s married three times in the course of the book.

Me: Three times! I didn’t know you were allowed to get divorced even once back then. Did she marry the I-don’t-give-a-damn-guy?

CC: You know it won the Pulitzer prize.

Me: Wait is that where that, “I don’t know nothin’ ’bout birthin’ no babies!” comes from, one of her marriages?

Me: I don’t know nothin’ ’bout birthin’ no babies either.

CC: That line is regarding Melanie.

Me: Seems like after three times she’d know though.

Me: Wait, who the hell is Melanie? I thought her name was Scarlett. As in Letter.

CC: You should read it. We have it downstairs.

Me: C’mon, that was funny. Scarlett. As in Letter. It’s like, literary, even.

CC: Did I mention it won the Pulitzer?

Me: Did she have to get married three times, if you know what I mean?

CC: If you just read the damn book, you’d know.

Me: That sounds like something the I-don’t-give-a-damn-guy would say.

CC: I can’t believe with all your women’s lit that you’re always going on about you’ve never read Gone With The Wind.

I’m plowing my way through the Norton Anthology of Literature By Women. I often make him listen to my thoughts on this, too, when we drive home.

Me: I didn’t know a woman wrote it!

CC: You didn’t know that Margaret Mitchell is a woman?

CC: Yeah, the most popular female author of the twentieth century until J.K. Rowling came along?

CC: Don’t you have something to do now?

Me: No, we’re still driving home. You’re trapped with me.

CC: {mumbles something incoherent but I’m pretty sure I pick out the words “window” and “pavement”}

Me: Hey, I think I’ve heard of Margaret Mitchell. Didn’t she write Gone With The Wind?

CC: I am going to bang my head on something pointy now.

Me: I heard that was a good book. Have you ever read it?

Have you? What haven’t you read?

48 thoughts on “I’ve Never Read Gone With the Wind”