Yesterday the egg hunt was left to me. We gave up all pretense of the Easter Bunny doing it after that first year. So I locked the kids in the basement while I hid the eggs. I was given a walkie talkie with which to communicate, but it had neither a belt clip nor a fist mic and so I left it in the kitchen. I occasionally heard squawks coming out of it and I’m sure they wondered if I was ever going to let them out.

You must understand that they dyed thirty-three eggs. 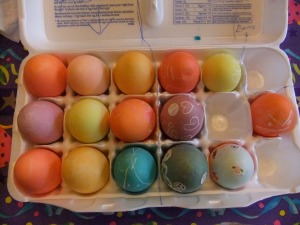 This happened while CC and I were at work. Also, when I envision the kids covering the dining room table to protect it while doing an art project, I see cardboard. I see newspaper. 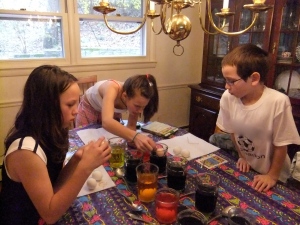 I never would have thought of wrapping paper. Ingenious. Wrapping paper that is eight dollars a roll plus shipping because I order it online a couple times a year in futile hope that there will always be wrapping paper for the nine billion birthdays we celebrate. The stuff that is stored right next to the plain brown, inexpensive craft paper. Neat.

In addition to thirty-three real eggs, I had twelve plastic ones, filled with various things. Forty-five eggs, that is, and I don’t even need #5 to help me with that.

I made it hard. We don’t really have a yard. We have a steeply raked (think: three stories high) and tiered mud and rock bank with 192,000 plantings put in by the crazy gardening woman who lived here before us.

I like how kids think parents won’t ever exert themselves. We exert ourselves constantly, what with the pretending to cook and running around and pretending to clean and buying things and also the working part. We parents are fully capable of exertion. A kid bases their concept of a parent not wanting to exert any effort because the kid comes to the parent at 9:30pm, on the parent’s only night off, when said parent is right in the middle of story time with a younger sibling and is tired from running around all day and in fact has already changed into comfy but cute yoga pants or maybe more correctly never got properly dressed that day and is thinking only of trying to get all these kids to bed to spend some quality time with the other parent if you know what I mean, and the kid says that they need posterboard for a very important project that is due tomorrow, so not only will the parent have to go out and buy the posterboard but the kid will need help with the project and also permission to stay up way past their bed time, and the parent swears, not exactly at them but definitely in front of them.

Children are incapable of understanding fine distinctions like this.

I exerted myself for the egg hunt. What better cause to spend effort on than your own personal amusement at the expense of your kids?

I pulled on my boots and hid those eggs on all three stories’ worth of that steeply raked mud and rock bank. I camouflaged them under the piles of leaves that I never raked up last fall, tucked them in among the crazy gardening lady’s 192,000 plantings, put them behind trees and inside separated bits of the retaining wall.

Of the plastic eggs, I issued this decree: One has a five dollar bill in it. One contains dog poop.

Oh, and we’ve had a lot of rain. And it was like eighty degrees yesterday.

There was an awful lot of complaining about how much work the egg hunt was.

The five-dollar bill one I hid in the recycling bin. #3 actually paused in front of the trash and recycling bins, looked back at me, and decided that it was too icky and I wouldn’t have wanted to touch that.

She forgets how many times I have cleaned up her vomit.

So everyone was pissed when #5, being fearless, dove headfirst into the recycling bin and retrieved a pink plastic egg that did, in fact, turn out to have a five dollar bill in it.

#2 was the one who found the very last plastic egg. They were all so convinced that I had spoken the truth regarding a dog poop egg that she opened it gingerly at arm’s length and the candy it contained exploded out all over the ground. Proving that despite all evidence to the contrary, they do still, at times, listen to me.